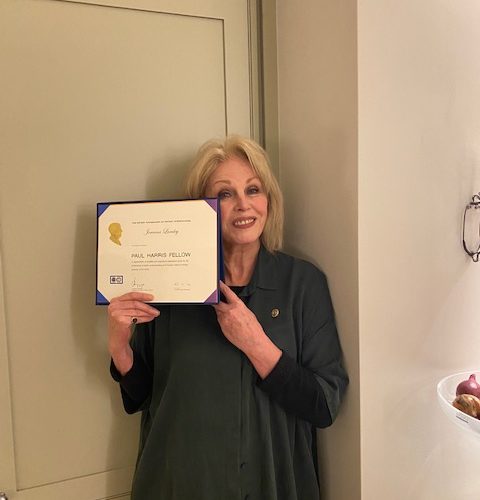 WHEN John Wilton was District Governor back in 2008/9, he presented several well-deserved Paul Harris Fellowships.

One was given to famous actress Joanna Lumley for her amazing work supporting the Gurkhas.

She was unable to attend the packed conference in Eastbourne to receive the award.

But 13 years later, she has finally received it – and she is over the moon.

John – now a member of Eastbourne AM Rotary Club – recalls: “It was a wonderful conference with around 1300 people, one of the most popular ever.

“Bryn Perry, the founder of Help the Heroes, was nominated for a PHF and so too was Joanna. She did such great work helping the Gurkhas.

“Recently, I heard she was due to attend an event at The Ritz so I thought finally I should present – with the help of the Gurkha Trust – Joanna with her Paul Harris Fellowship, and she really was very happy to receive it.

“Joanna did great work to get the Gurkhas settled in this country and she also fought valiantly for their pension rights.

“She was fully deserved of a PHF, and her reaction goes to show how valued the Paul Harris Fellowships are when awarded to very deserving non-Rotarians.”

Joanna has now been in touch with John.

She said: “I am so stunned and thrilled to receive this tremendous honour, and I am far, far happier to get it now rather than 11 years ago as it brings back with a rush all those exciting and pretty challenging days struggling to get the Gurkhas’ cause over the line.

“This beautiful little medal and the citation mean the world to me, thank you so much for a very unforeseen and undeserved recognition.

“You are so kind to have taken the trouble to do this dear John.”

She helped Gurkhas who retired before 1997 win the right to settle in the UK. Gurkha welfare groups.

She said back in 2011: “Our campaign had moral right on our side, and the vast majority of the British public wanted the government to amend the law to allow Gurkhas to settle in the UK.”

Ms Lumley’s supporters insist that her campaign successfully reversed decades of discrimination against older Gurkhas who fought for the British army yet were denied the right to retire in the UK.