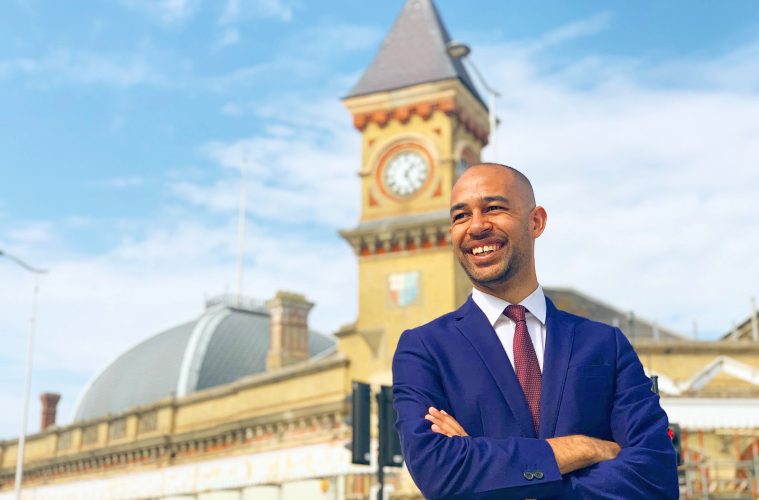 Josh Babarinde OBE: a very special man determined ‘to give back’ to Eastbourne

JOSH Babarinde is a very special man who’s still determined ‘to give back’ to Eastbourne.

He’s only 27 and many will recall the former Hampden Park schoolboy received an OBE in the Queen’s Honours List last year.

But Josh will never forget his roots and believes he can still make a difference in his home town.

He qualified last month as a Covid 19 vaccinator after completing training with the NHS and St John Ambulance.

Josh said: “When we realised the full extent of Covid, I was racking my brains thinking what could I do. I like to roll my sleeves up and get stuck in.

“I set up the #EBtogether scheme to call shielding residents in the first lockdown, and also a project donating video phones to local care homes so residents there could keep in contact with their relatives.

“The sooner we get our town and our country vaccinated, the sooner we can get out of this awful pandemic. That’s why I’ve trained as a vaccinator.”

The OBE at such a young age was a massive achievement for Josh.

He recalls: “I was on a Zoom meeting back in May last year and my concentration drifted and I logged onto my emails.

“I saw one from the Palace and I honestly thought it was a scam. I ducked out of the meeting and rung them up only to be told it was true!

“I was absolutely honoured, staggered. I could not believe it – I’m just a normal guy from Hampden Park!

“Because of Lockdown, the Queen’s Honours list was delayed from June until October so I had a long time to keep it a secret.

“My overriding thought was: how can I use the honour to give back to Eastbourne? Because it was not my efforts alone that earned it. My achievements stand on the shoulders of so many local giants in Eastbourne.

So, what led the former Cavendish Head boy to being included on that magical Queen’s List?

After setting up a small maths tutoring business while at school and working as a Saturday waiter at Picasso’s while at college, Josh went on to study Politics at the London School of Economics.

But he chose not to ‘get rich and earn big money in a large bank’ like most of his fellow students.

He became a volunteer youth worker in the East End of London working with young offenders.

Josh recalls: “I have always been passionate that young people should have the best start in life possible, and that they have the opportunity to thrive.”

He set up Cracked It, where ex-offenders were taught how to repair broken phones.

It became a massive success as the social enterprise developed pop-up shops in large skyscrapers across London at big employers such as Lloyds Bank, the Ministry of Justice and River Island.

It won national press coverage and international awards – including a Forbes 30 under 30 listing.

Josh said: “Our ex-offender repair technicians were making money in a positive way.

“Yes it was about making a commercial business successful but it was also about impact, and seven out of ten of the people did not reoffend after working for Cracked It.”

Covid meant that last year the skyscrapers were no longer an option.

“I decided then that we must think collaboratively, and we shared our winning model with other organisations so that by January 2021 Cracked It came to an end – putting ourselves out of business before Covid could!

The US Ambassador to the UK discovered Josh’s work and sent him to the United States to share his model and expertise with government agencies such as the FBI.

Josh was also invited to meet Princes Charles and Harry at Clarence House, where he shared his insights on tackling youth crime.

“It was never about the money; it was always about impact and then spreading the model, which we achieved.”

He’s now Head of Learning and Innovation at a global entrepreneurship school where he supports around 1000 business people starting their own company. For Josh, it’s about supporting others and making a positive impact.

“Devoting myself to building my social enterprise and impacting hundreds of young people over several years was a huge honour. But I’ve always wanted to pay back what Eastbourne has given me.”

He’s joined the Board at East Sussex College (Eastbourne campus), mentoring students in schools across town, and used his OBE to help open doors local charities and provide advice.

In 2019 he was LibDem parliamentary candidate for Bethnal Green and Bow in London, the area where he launched his social enterprise.

Now he’s standing for the LibDems in the forthcoming May by-election for Eastbourne Borough Council in the patch where it all began for him – Hampden Park.

“I’m standing so I can play my part in helping to lead our community out of this pandemic and into a recovery that will see Eastbourne thrive again.

There’s never been a more important time for me to roll up my sleeves like this and get stuck in.”