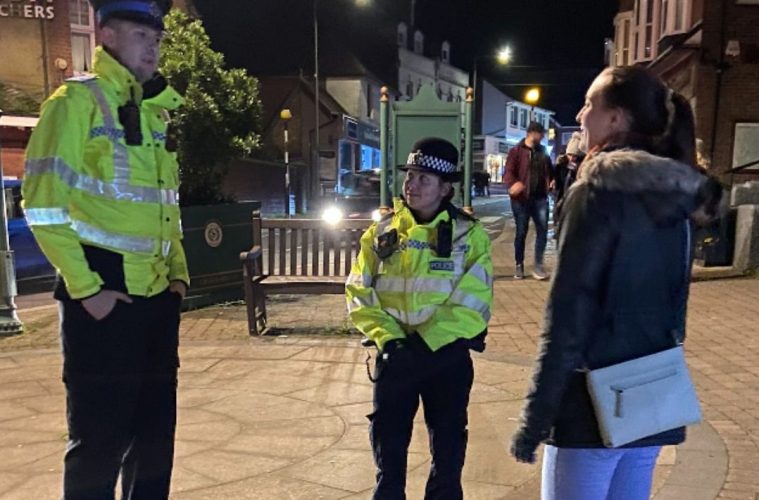 Extra officers are on patrol across East Sussex this weekend as part of an initiative aimed at keeping people safe during the night-time economy.

Dedicated teams are covering Hastings, Eastbourne, Rother, Lewes district and Wealden on Friday and Saturday night, focussing on areas where people have reported feeling unsafe using the Street Safe app, throughout December and into the New Year.

The Street Safe app is a pilot service that allows people, particularly women and girls, to anonymously tell police about public places where they have felt or feel unsafe, because of environmental issues such as street lighting, abandoned buildings or vandalism and/or because of some behaviours like being followed or verbally abused.

Police in East Sussex, responding to the concerns of the public and a recent rise in reports of crime associated with pubs and clubs, have now launched Project WAVE – an initiative aimed at allowing people to enjoy the night-time economy without fear for their safety.

They will maintain a visible presence at taxi offices to ensure the safety and wellbeing of anyone who may be vulnerable, particularly through alcohol consumption.

Through engagement, officers will also promote the Ask for Angela campaign which allows people who feel unsafe in a pub, bar or club to discreetly seek help by approaching venue staff and asking for Angela. The code indicates to staff that the person requires help and a trained member of staff will then come to their aid.

Inspector Kara Tombling said: “Project WAVE is an excellent opportunity for us to reassure people, particularly women and girls, that we understand and are listening to their concerns around safety during the night-time economy.

“Data from the Street Safe app allows us to build a unique picture of where people feel unsafe in our community, and work on reducing this fear through an increased police presence in these areas and dedicated, proactive patrols.

“As well as providing reassurance, these officers will be able to officer guidance and support and we encourage anyone feeling unsafe to stop and speak with them. They are there to help you, so please have that conversation if you have any concerns.”

Project WAVE runs alongside existing initiatives such as Operation Blitz, which allows members of the public to contact officers on the ground through a dedicated mobile number from 6pm to midnight on Fridays and Saturdays if they witness or have concerns around anti-social behaviour.

Police also continue to work with partners to support vulnerable people during the night-time economy, including the Safe Space scheme in Hastings. Run by independent charity Street Pastors, the initiative sees volunteers patrol the town centre providing care, basic first aid and support to those in need. It runs every Saturday night, but with the aim of extending it to Friday nights in the near future.

Sussex Police has recently launched a six-week survey seeking the views of people across the county on the experience of women and girls as victims of harassment, sexual and violent crime.

The survey forms part of the commitment by Sussex Police to engage with local communities on this issue, to better understand lived experiences and enhance work already underway.

You can give your anonymous views in the online survey here.

To report a crime, contact police online or by calling 101. Always dial 999 in an emergency. Information can also be passed to police anonymously via the independent charity Crimestoppers anonymously on 0800 555 111.