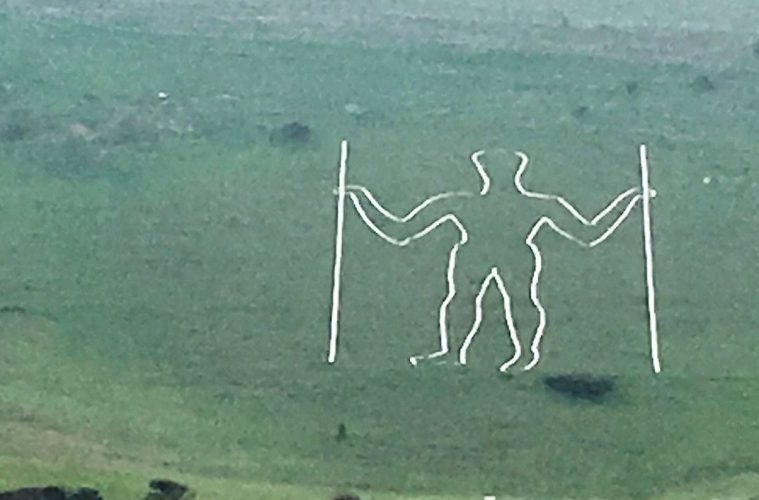 Police are investigating the criminal damage of an ancient South Downs landmark that was defaced by vandals.

The world-famous Long Man of Wilmington, a 235 feet figure originally carved in the chalk of the hill between Eastbourne and Lewes, was discovered to have had a mask painted across its face on Tuesday (January 26). The prominent figure on the hillside above the village of Wilmington is a protected archaeological site owned by the Sussex Archaeological Society and highly visible from the A27 which passes to the north of the site.

Sergeant Tom Carter of the Sussex Police Rural Crime Team said: “Whilst this damage may have been perpetrated for humour or some other reason, the actions that have been taken are unacceptable. The Long Man of Wilmington is protected by law as a Scheduled Ancient Monument for its historical significance; on top of this the figure is well known and enjoyed by the local community and this criminal damage is an affront to those who work to maintain this heritage asset for the enjoyment of all. I would encourage anyone who has knowledge of the perpetrator of this crime to come forward.”

Mark Harrison of Historic England said: “Historic England is working closely with Sussex Police Rural Crime Team to identify the offenders who have caused damage to this protected archaeological site. We will also be liaising with the owners in order to provide advice and guidance to restore the Long Man of Wilmington.”

Anyone who witnessed activity on the hillside or who has information as to who caused the damage is asked to report online or call 101 quoting serial 687 of 27/01.