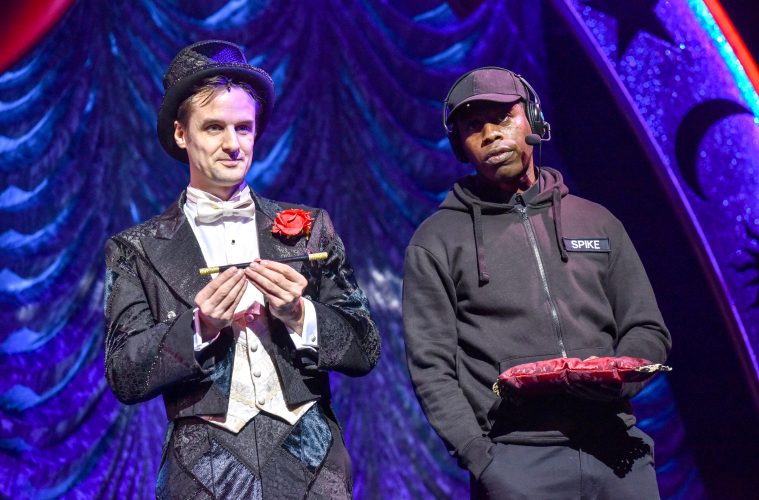 By Mischief Theatre and Penn & Teller

Already famous for their physical slapstick and knockabout acrobatics, Mischief spent many weeks out in Las Vegas working with master magicians Penn & Teller to craft this spectacular feast of a show and are raising the bar with their dare-devil stunts, jaw-dropping feats and irresistible comedy genius in Magic Goes Wrong.

The story follows a hapless gang of magicians staging an evening of grand illusion to raise cash for charity. But as the magic turns to mayhem, accidents spiral out of control and so does their fundraising target!

In true Penn & Teller style, the stunts are dangerous, the calamities are bloody, and the risks are perceived as life-threateningly high (of course in reality the cast are totally safe, but some scenes of gripping tension and jump-scare thrills aren’t suitable for younger children who might believe it to be terrifyingly real! Recommended age 11+years)

Book your tickets now, before they vanish out of sight (or sell out!).

Magic Goes Wrong at the Congress Theatre 3 – 8 August 2021. Tickets priced £27 – £42 go onsale 10am Monday 26 April 2021. Book at eastbournetheatres.co.uk with view-from-seat facility and the option to print tickets at home, or call Box Office on 01323 412000. Eastbourne Theatres has been awarded the See It Safely industry mark and ticket purchases are covered by Eastbourne Theatres Covid-19 policy.

Penn & Teller are co-creators of the show and won’t be appearing on stage. 2021 casting to be confirmed.