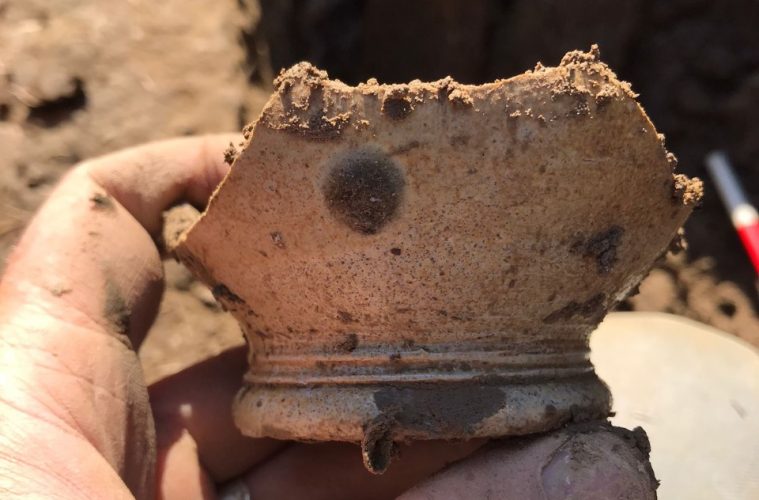 A medieval well still filled with water and a Victorian bottle containing ink to blacken grates and even shoes were just some of the finds uncovered during a recent excavation on land next to Eastbourne’s most historic building.

Heritage Eastbourne organised the excavation next to Langney Priory, parts of which are believed to date back to the 11th century, in partnership with Friends of the Earth and St Anthony’s ward members from Eastbourne Borough Council.

The land – in Etchingham Road – is due to become a community garden and the excavation was held in early September to find out more about the Priory, which was actually a Grange or monastic farm.

Of particular interest was a medieval well uncovered during the excavation which was partly filled with water and appears to have collapsed in on itself.

Archaeologists believe it could be one of a series of wells in the area.

Eastbourne Borough Council lead member for tourism and culture Margaret Bannister said, “This was a very successful excavation. We have learnt a lot and we will be able to help the community garden take shape because we now know where the sensitive archaeology is.

“It is going to remain a bit of a mystery until we can go back and re-examine the area. What we really need to do next is open up more of the area so we can see what is going on underneath it, join the dots up and fully understand how this area particularly relates to the medieval Grange.

“I would like to thank the staff and volunteers as well as everyone who came along to speak to the teams during the dig.”