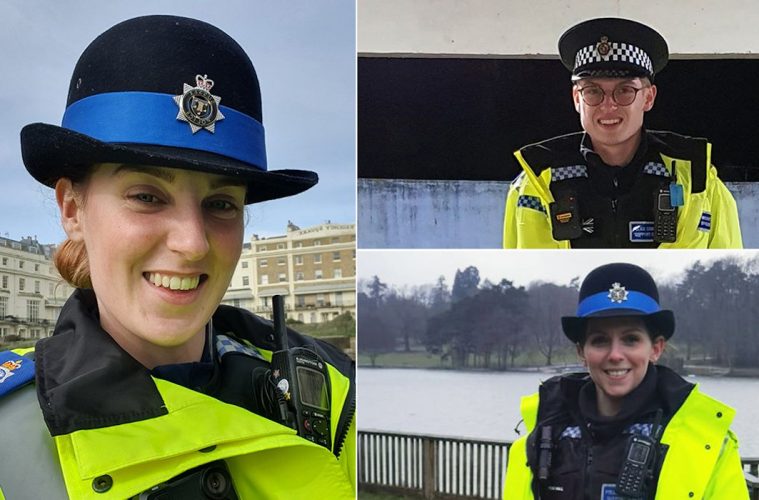 As the nation entered its third lockdown and the force stepped up its response to the pandemic, PCSO Apprentices Mark Ridley and Sophie Mamoany were preparing to start their policing careers in Sussex communities.

Along with 14 fellow PCSO apprentices, the new officers were deployed a few weeks early in January to help support the force’s effort to protect the NHS and save lives.

PCSO Mark Ridley is one of eight new PCSOs in Brighton and Hove: “To be a part of the team, out on the ground in Brighton, assisting vulnerable individuals and supporting communities during the pandemic is something I am so proud of. Having already completed two weeks shadowing with our new Neighbourhood Policing Teams, we were keen to get back out there and help at this time.”

Another five apprentices have joined Crawley and Mid Sussex, while three have joined the Arun and Chichester district. Working alongside their tutors at all times, the apprentices have been undertaking patrols, engaging with communities and ensuring Covid regulations are followed, including dealing with breaches. At the same time, they have been looking out for those who are most vulnerable at this time and engaging with partner agencies to ensure they get the help they need.

In Brighton PCSO Ridley and colleague PCSO Hannah Stevens have been helping to protect elderly people from Covid scams and other fraud, including a vulnerable elderly victim in Brighton whom PCSO Ridley safeguarded after she was scammed out of more than £1000.

All the new PCSOs have been tackling anti-social behaviour (ASB), following concerns from communities. In Mid Sussex, PCSO Sophie Mamoany is one of the three new PCSO apprentices based in Haywards Heath who have been tackling anti-social behaviour at the main vaccine centre for Mid-Sussex. In response to complaints from volunteers at Clair Hall about a large group of young people, aged 14 to 17, regularly harassing them, the PCSOs undertook daily patrols and helped accompany the young people home, informing their parents and warning them of fines. NHS partners at the vaccine centre have now reported a significant decrease in anti-social behaviour and thanked the Neighbourhood Policing Team.

In Bognor PCSO Will Parker has been addressing anti-social behaviour in response to reports while colleague PCSO Macauley Larbey has been proactive in patrolling areas known for drug dealing in Chicheseter.

Sussex Police Chief Constable, Jo Shiner, said: “I’m proud of the impressive start these 16 new PCSOs have made in protecting and supporting their communities at this challenging time.

“We took the decision to deploy this cohort three weeks early to further strengthen our frontline teams as they continue to meet the challenges of the pandemic and keep our communities safe. As the apprentices had already completed their essential training during their initial nine weeks at Sussex Police HQ, we were able to reschedule some of their classroom-based learning.

“I’m also delighted to welcome to the force a further 14 PCSO apprentices who are commencing their initial training at Police HQ this week, undertaking a programme carefully adapted to meet Covid safety guidelines.

“Our Neighbourhood Policing Teams have expanded through the uplift of additional PCSOs over the last two years, so I am pleased to say an extra 17 new sergeants have joined these teams in recent months, resulting in greater supervision and a more proactive, localised approach to tackling community issues.”
“I wish all these new PCSO Apprentices every success in their new careers.”

The recruits are continuing their three-year apprenticeship on the job alongside their tutors.
Since joining the East Brighton team in early February PCSO Mark Ridley has dealt with numerous incidents, including assisting with a road traffic collision involving injuries in Brighton, where the driver had made off. Mark, with his tutor Chris Rogers, helped in securing details from multiple witnesses, and took one of the vulnerable juvenile passenger back home, freeing up the patrol unit.

“Before I joined Sussex police I served in the military for nearly 12 years but unfortunately I was medically discharged in 2016 after bring involved in a RTA that nearly killed me and has left me with life-long injuries.

“I always had the desire to get back to being in uniform and Sussex police provided me with that opportunity, seeing past my disabilities. I’m gaining a lot of satisfaction in helping people and proving that you can still achieve good things if you find your ability within a disability

“My specific beat area is Moulsecoomb and Bevendean, and I’m enjoying meeting and engaging with these communities and look forward to providing the best service I can.”

“I always wanted to join but I had needed to fit my work around my children. Now was the best time to start my new career, and make my children proud.

“Every day is different. I have dealt with shoplifters, supported romance fraud victims, broken up groups and supported the homeless community to follow the guidelines.”

On her first night shift Joanne was credited with saving the lives of two teenage girls after she and her tutor heard a radio call from the force contact and control centre that the girls were at risk and needed locating. Joanne kept them talking until an ambulance arrived.

“This is what I like about being a PCSO, we have the time to put in that bit extra. Time to make sure the persons we are dealing with are OK; time to stop and chat, and wave at little kids. This is how PCSOs build trust, gather vital intelligence to prevent crime and strengthen investigations.”

Sussex Police & Crime Commissioner, Katy Bourne said: “It is impressive that these PSCOs have already made such a positive impact on the communities they serve.

“They have all displayed a determination to make our streets safer and to support their police officer colleagues in gathering the intelligence needed to strengthen investigations and safeguard our most vulnerable.

“Chief Constable Shiner has been determined to keep our frontline strong during this pandemic and these extra boots on the ground have helped to bolster neighbourhood policing at a time when it is needed the most.”

For PCSO Will Parker in Chichester, safeguarding has been the most rewarding. “It’s been great getting involved and helping others. Our role is so important for identifying the most vulnerable and getting the relevant agencies involved.

“My tutor and I attended the home of an old lady who had complained about noise from neighbours. It was clear the lady was very vulnerable and not coping. She was very isolated, had severe mobility impairment and in such poor health that I called an ambulance to get her checked.

“After getting relevant services involved and measures in place, I followed up with the lady to check on her welfare and her living conditions were already improving. She was so thankful and appreciative of what I had done for her. It was really rewarding.”