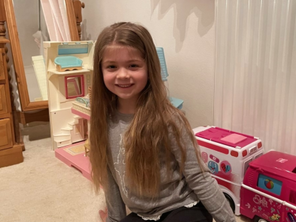 Six-year-old Millie Hardy plays ‘Goldilocks’ in the new Crane & Co commercial, which has just been released online and is playing at Hailsham Pavilion for the next two weeks.

In the commercial ‘Goldilocks’ searches for a bedroom that is ‘just right’ as her family views a house.

According to the estate agents, this was Millie’s first starring role and she auditioned for the part after hearing about the opportunity through school.

Millie said, “For the audition, I had to go to the studios where there were lots of big cameras.

“They wanted to see whether I could follow the instructions. I was really pleased and surprised when I was chosen.”

Crane & Co, which sells homes in Eastbourne, Hailsham, Bexhill and surrounding areas, said Millie had taken some musical theatre classes in the past.

The estate agents said that initially Millie was unsure whether to audition, especially when mum told her she would have to be videoed, but she gave it a go and hasn’t regretted it since.

Millie said, “It was really good fun and I would love to be an actor when I am older.

“I especially enjoyed watching Matilda and practicing some of her facial expressions before we filmed.

“The funniest part was when we had to keep making the book of Goldilocks dusty again to retake the scenes.”

A spokesperson from Crane & Co said while giving a nod to the story of ‘Goldilocks and The Three Bears’, the commercial captures the story of what family house-hunting looks like through the eyes of a six-year-old.

Creative Director Kai Zammit said, “Writing an original story, with a lending hand from an old favourite for Crane & Co was a dream come true. With this commercial, we wanted to capture the magic of moving home where one story ends, and another begins. Houses aren’t just bricks and mortar, they come with stories.

“For me personally, the true hero on the set was Millie. This was her first time on film and even after a very long day of shooting, she kept smiling and was happy to be there.”

Mike Crane, who is the managing director of Crane & Co, said, “We would like to say a special thank you to Millie, who was an absolute star, and to her mum, who was there supporting her throughout the long hours of filming.

“Thanks also to Kai and the team. They really capture the excitement we all feel when finding a home that is just right for our next chapter in life.”

Watch Millie in ‘A New Home’ by visiting craneandco.co.uk