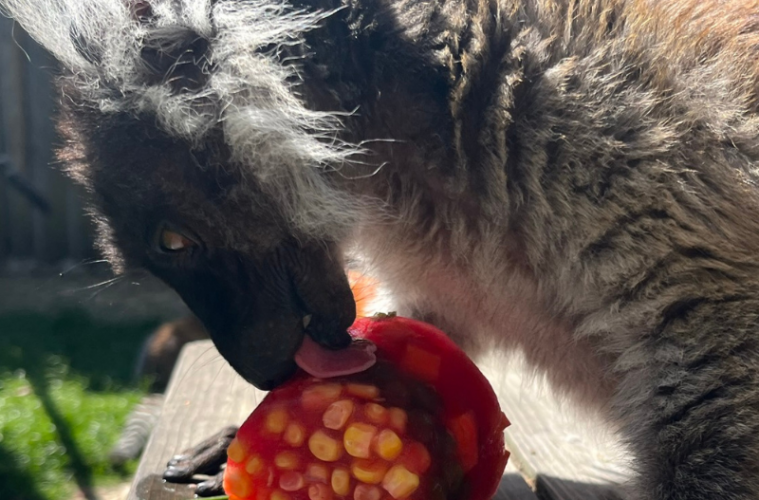 As the UK enjoys its first heatwave of the year, Zookeepers at Drusillas Park in East Sussex have been finding creative ways to keep their animals cool in the sunshine.

With temperatures forecast to soar up to 28°C in East Sussex on Friday and Saturday (17th and 18th June) and getting warmer throughout the week, it’s important for zoos across the country to make sure their animals are comfortable and able to thrive in the heat.

Drusillas Zookeepers have been pulling out all the stops to protect their animals from the heat by making sure they have access to additional water sources and creating extra shaded areas where they can keep out of the sun.

But some of the keepers have been getting a little extra creative by creating food-layered ice lollies inspired by their favourite summer drinks – namely a ‘monkey mojito mocktail’ containing tea, mint and edible flowers. The Park’s troop of cheeky squirrel monkeys delighted in rolling these around and smashing them on stones to prise out the tasty gems hidden inside.

These cooling concoctions were served up to a number of other animals at the Sussex zoo, including capuchin monkeys, lemurs, coatis, and binturong containing various combinations of vegetables, herbs and greenery.

Deputy Head Keeper, Jamie Fryer, commented: “We use these ice lollies to keep the animals cool in the heat because animals do not sweat in the same way humans do. Ultimately, the animals are after the rewards hidden within, but as they grab, lick, nibble and break down the ice lollies to get the food, their mouths and paws are cooled. The food hidden inside is carefully measured and taken from their normal daily food allowance so although it’s lots of fun to see them with ice lollies, they still sit within their monitored diets.”

“Ice lollies are a great way to keep the animals cool, but they also serve an enrichment purpose as well. Making the animals work for their food in creative ways, helps to stimulate them mentally and physically and forces them to use their instincts to look for food as they would in the wild.”

Elsewhere in the zoo animals such as the flamingos have been combating the heat by walking around their waterfall, the capybaras and beavers have been taking long dips in their pool and the red pandas have been napping the day away in the shade of their trees.

For human visitors it’s easy to keep cool at the Park at the Get Wet! splash pad- the ultimate water play adventure which is now open every day until the end of September. Soak up the fun on a sunny day with water jets, ground geysers, swirling streams and spiralling sprays! There’s also plenty of shady spots and icy refreshments to make sure the whole family can keep cool.