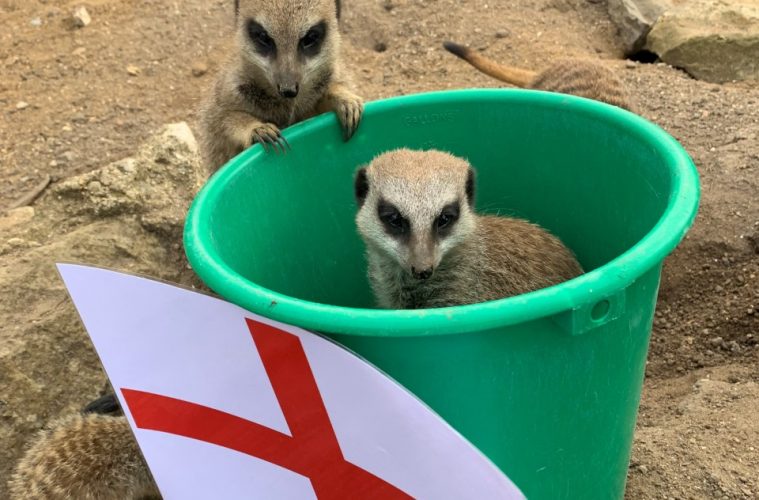 The mystic meerkats at Drusillas Park in East Sussex have got all their predictions for England’s Euro 2020 games right and now they’ve predicted who will win the big final at Wembley on Sunday (11th July.) What started off as a bit of fun as part of the Park’s enrichment programme, has snowballed into a big buzz around the mob. First, they predicted England would win against Germany, then Ukraine and then Denmark. Now they’ve predicted another win for England against Italy- the first major football tournament win for the men’s team since 1966.

Deputy Managing Director Cassie Poland said: “The atmosphere and buzz around the meerkats is amazing. At the Park we’ve been so impressed by England’s performances and team spirit so it’s been great to get behind the squad and show our support. Although we wish both teams luck on Sunday- it would be incredible for England to win! It’s been a difficult 15 months for many of our visitors, staff and for the Park so it’s been brilliant to see the smiles on people’s faces and the great atmosphere that’s come from the mystic meerkats predictions and then England’s results!”

The mystic mob seem to be loving their new-found psychic powers and started to get excited when they saw the Keeper arrive with the England and Italy flags and buckets. The Park’s meerkats- Ross, Rachel, Joey, Phoebe, Monica, Chandler, Tamu and new pups Kane and Sterling- were ready. Although Apollo, Buzz and Tyson stayed on the subs bench for this one enjoying watching the rest of their group do the work!

Head Keeper Sophie Leadbitter placed the carefully prepared buckets in the sand, with the England flag attached to the one on the left and the Italy flag on the right. Then it was down

to the mystic mob. The whistle was blown and Tamu and Joey were straight in there, confidently in the England half. Their teammates pushed forward and didn’t even look at the Italy bucket. Babies Kane and Sterling were right at the front- like their namesakes. The mystic meerkats started to climb inside the England bucket to really make their feelings known. It was a clear England win. The mystic meerkats are backing the Three Lions and are sure that it really is coming home. They haven’t been wrong yet so all eyes will be on the final on Sunday.

Although it might seem a strange activity for meerkats, the activity is part of the zoo’s enrichment programme, which makes sure all the animals enjoy a diverse diet in imaginative and unusual ways. The activities encourage them to think and work for their food as they would in the wild.

Head Keeper Sophie Leadbitter said: “The whole zoo team can’t wait to see what England can do against Italy on Sunday. We’re so proud of our group of meerkats! We can’t quite believe how much attention they’ve been getting and they’re taking it all in their stride. Let’s hope England can take it the whole way and win on Sunday- the meerkats are on a roll and Gareth Southgate’s squad have done amazingly so far!”

“The Keepers were so impressed by strikers Harry Kane and Raheem Sterling that we’ve actually named the group’s newest babies after them and it really suits them. It’s strange to think that this will be their last prediction….for now! But it’s the most important one yet- let’s hope it really is coming home on Sunday!”