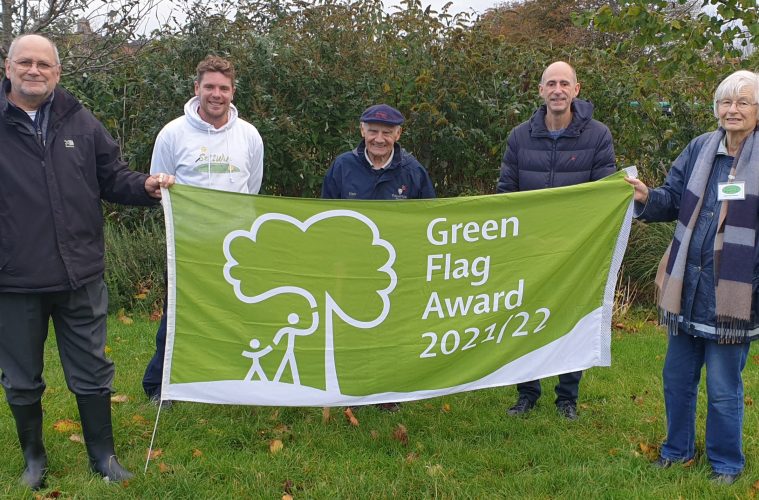 The awards to the three much-loved and hugely popular Eastbourne parks follow 18 months that have seen parks become lockdown lifelines. They have played a vital role for people across the country as places to breathe, relax, exercise and meet friends and family safely.

The parks are maintained by Eastbourne Borough Council. Cllr Colin Swansborough, Cabinet Member for Place, Services, and Special Projects, which includes parks, open spaces and ground maintenance, said he was delighted that the parks had been recognised as places for leisure and recreation and something of a sanctuary during lockdown.

“Our parks took on vital role during the Covid outbreaks,” he explained. “And even though we had to reduce some of the routine maintenance, they remained in good condition throughout the year.

“The parks provide a great escape for a huge number of people, both residents and holiday-makers. I am delighted to accept the Green Flag awards on behalf of the dedicated team of gardeners and ground staff who work hard to make sure our parks are beautiful places to visit.”

More than 2,000 parks and green spaces across the UK received the Green Flag Award for 2021, as the scheme celebrates 25 years.

Research carried out by YouGov for Keep Britain Tidy over the summer revealed that access to a quality park or green space helped improve people’s mental health with almost six in ten (59%) saying they felt less stressed when using the park and 55% saying they felt more positive in general.

The survey also showed that more than half of people (53%) visit a park or green space at least once a week and more than nine in ten (93%) think that parks and green spaces are important to their local community.

Commenting on the announcement of this year’s winners, Keep Britain Tidy Chief Executive Allison Ogden-Newton OBE said: “We are delighted to be the custodian of a scheme that does so much to ensure our parks and green spaces go from strength to strength.

“At a time when parks have been at the heart of every community across the country it is perhaps not surprising that 95% of the public thinks that their local parks and green spaces need to be protected,” she said.

“This is why the Green Flag Award is so important. It ensures that parks and green spaces are managed to the highest standards and are safe and accessible for everyone to enjoy.”

The Green Flag Award scheme recognises and rewards well-managed parks and green spaces, setting the benchmark standard for the management of recreational outdoor spaces across the United Kingdom and around the world.

With photo of Friends of Old Town Rec celebrating the park achieving the Green Flag award.