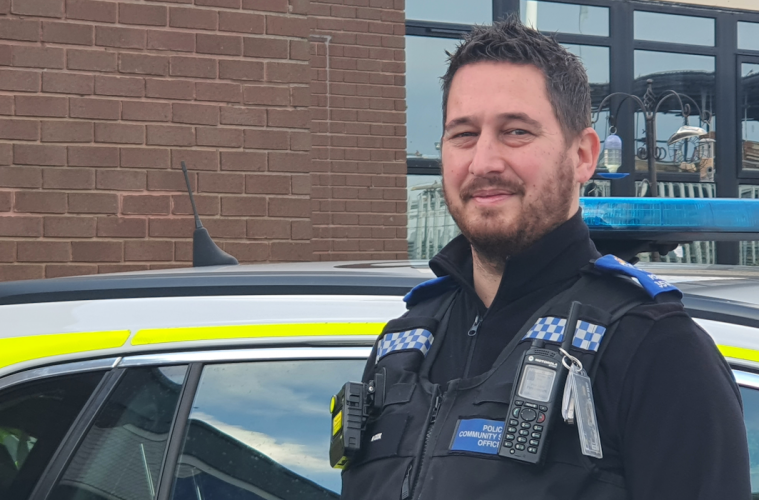 ‘No two days are the same’ – Eastbourne PCSO Nick Cox

To mark the national week of action, officers have shared their experiences of what it’s like working within Sussex’s Neighbourhood Policing Teams.

Eastbourne and Wealden PCSO Nick Cox (pictured) I have worked for Sussex Police for six years. The first part of my career I was in the control room taking the 999 and 101 calls. This gave me a good working knowledge of Sussex Police and how we can help victims and the communities that they live in.  After working in that role I wanted to get out from behind a desk and be out helping the people I spoke to on the phone more.

Two years ago I decided to make the move to become a PCSO.  It sounds like a cliché but every day is different – one minute you could be dealing with a neighbour dispute or engaging with the general public at organised events, then you could be called to assist with a collision, closing roads, or even protecting scenes where major incidents have occurred.

Last week I was on an operation aimed at disrupting anti-social behaviour issues being caused by a group of young people in Eastbourne. During our patrols members of the group were seen and spoken to having been abusive to employees at a shop in the town centre. The group were told to leave the centre and a Section 35 Dispersal Order was then requested in order to disperse the youths if they continued to cause issues.  This blended into a joint operation with British Transport Police over the next two days where we were asked to assist BTP and Rail Enforcement Officers (REO) based at Eastbourne and Hampden Park railway stations.

Over the two days, a total of 45 penalty fares and one Section 23 cannabis warning were issued. While at Hampden Park station, we also spotted a high-risk missing person and were able to ensure their safe return.

After the operation had stood down, myself and my colleague went to conduct our Direct Patrol Activity in local crime hotspots. While doing this a call came over the radio asking for assistance for a male in distress. We arrived and tried to engage with the man until a Response officer was on scene. Fortunately, the man was talked down and this allowed Sussex Police to arrange the support he needed.”

Lewes and Newhaven PCSO Amy Mason The afternoon started with an appointment I made earlier in the week to visit an elderly man who has been scammed out of £500. This particular scam relates to a phishing email purporting to be one of the victim’s contacts and asking the victim to buy some gift cards.

Full details were taken and advice given; these visits are very common in the daily life of a PCSO as sadly many people fall victim to all sorts of scams.While dealing with that appointment, a call came in that a 12-year-old girl had gone missing, so off I go with my colleague to search for her. At times like these it’s all hands to the deck as time is of the essence; thank goodness she was found safe in a relatively short space of time. I then headed back to the coast to check out a report of an unauthorised encampment, and after that I shall be heading to carry out our Direct Patrol Activities in which we target areas that have experienced some kind of issues of late.

The colourful beach huts pictured have suffered some damage in the past from attempted break-ins and therefore I endeavour to include them in my patrol activity.

All in all quite a varied shift which is what I like and definitely no time for boredom!”

Rother PCSO Rachael Scott I have been a PCSO for nearly 18 years now. I am also a tutor so I like to try and pass on my knowledge and experience over the years to new PCSOs. It’s a long time to have been in one role, but I can honestly say that it’s the kind of job which is like no other. Every day is different, you never know quite what you might come into and face each day.  As a PCSO you may get involved in a number of things: guarding the scene of a major crime such as a murder or serious assault; you may start your day going straight out to deal with a collision where you will be required to undertake traffic management to ensure the safety for other road users; you may have to complete house-to-house enquiries for different crimes whereby witnesses are being sought after.

As a PCSO you will be called to jobs such as neighbourhood disputes, carrying out local enquiries for other forces, dealing with and investigating crimes to victims who have been scammed. You may be asked to attend an address where a welfare check is needed on someone who hasn’t been seen for a few days, or for assistance to look for missing people. Some of the more obscure calls include a dog/horse/sheep loose in the road, or a fallen tree blocking the carriageway, or maybe a suspicious package that needs dealing with. Quite often we are also called upon to deal with issues involving the Street Community or someone vulnerable who just needs our help. A big part of our role is also dealing with children and young people – sometimes for anti-social behaviour, drinking and drugs – but ultimately it’s about protecting them from harm.  Our work is in the community. We build links and relationships that can be trusted. We report the suspicious and the unusual, always keeping an eye on everything that is going on. Obviously crime prevention is what we are about! “