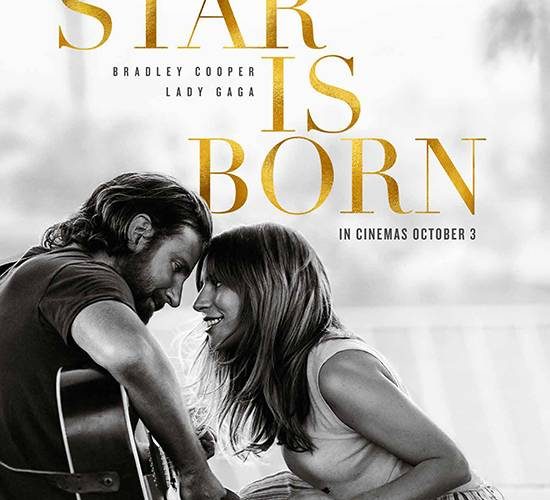 The Congress MOVIE Theatre continues to bring a series of especially curated films back to the big screen for audiences to enjoy in the safe environment of the refurbished Congress Theatre.

November screenings will include; A Star is Born (6 November), Black Panther (7 November), The Shape of Water (13 November), Jo Jo Rabbit (14 November), Once Upon a Time in Hollywood (20 November) and Joker (21 November).

The first in the November Cinema season is the award winning emotional remake of A Star is Born which stars Bradley Cooper (also in his directional debut) and Lady Gaga in her first big-screen starring role.

In this haunting love story Jackson Maine (Cooper) is a fading country rock musician who discovers – and falls in love with – struggling artist Ally (Gaga). Maine’s life of self-destruction is momentarily given purpose as he coaxes Ally into the spotlight but is their path entwined or just meant to cross as the two watch her music career take off?

The next movie in the cannon is a must for Marvel fans, Black Panther starring the late, great Chadwick Boseman. This ground-breaking film contains treachery and danger galore. T’Challa (Boseman) must step up to lead the people of Wakanda after his father’s death. Enemies from both outside and inside his country threaten to overpower his leadership but they have not reckoned with this new king the Black Panther!

Don’t miss the chance to see legendary Director Guillermo del Toro’s Shape of Water, this other-worldly fairy tale noted as one of the best films of 2017 and received numerous awards and nominations including 13 Academy Award nominations. Set against the backdrop of Cold War era America it follows a mute worker at a high-security government laboratory who forms a relationship with a captured humanoid amphibian creature.

Jo Jo Rabbit is up next, a satirical story of hope and humanity this is the boldest film from director Taika Waititi. The tale is told through the eyes of an awkward young German boy, raised by a single mother (Scarlett Johansson), whose only friend is an imaginary projection of Hitler. Jojo Betzier (Roman Griffin Davis) has some strange outlooks on everyday events thanks to a lifetime of Nazi propaganda.  Jojo must confront his blind nationalism as World War II rages on.

Another iconic modern director takes the reigns of the next film in the mini-season with Quentin Tarantino’s Once Upon A Time in Hollywood. This multi-award-winning film 2019 film stars a whole host of famous actors; Brad Pitt, Leonardo DiCaprio, Margot Robbie, Emile Hirsch, Damien Lewis and Dakota Fanning.

The final film to be announced is Joker theOscar winning psychological thriller, this original film portrays an alternative origin story for the iconic arch nemesis of Batman. Troubled comedian Arthur Fleck (Joaquin Phoenix) is down-trodden and his life in Gotham City enters a downward spiral, culminating in the appearance of his alter-ego Joker.

With restricted numbers of seats available early booking is recommended, for individual bookings call the box office. The Congress is fully covid-19 compliant with a number of safety measures in place. Safety for everyone is paramount, the venue will be thoroughly cleaned after each performance, and multiple entrances/exits allow secure access with large open plan communal areas to allow easy social distancing.

All tickets on sale now to book call the Visitor Services Team on 01323 412000 or online eastbournetheatres.co.uk which now gives the option to print-tickets-at-home.