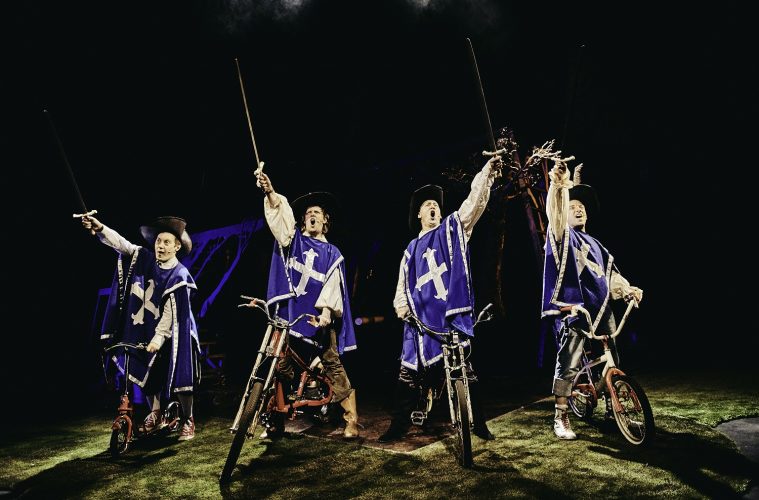 One for All and Every Man for himself! The Three Musketeers Comedy Adventure, Eastbourne May 2022

One for All and Every Man for himself! The Three Musketeers Comedy Adventure, Eastbourne May 2022

IT’S “ALL FOR ONE” AND EVERY MAN FOR HIMSELF, AS THIS CLASSIC ADVENTURE RECEIVES THE LA NAVET BETE TREATMENT!

Eastbourne Theatres are excited that the award-winning comedy creators Le Navet Bete are bringing the hilarious comedy adventure The Three Musketeers to the Devonshire Park 17-21 May. Featuring hilarious heroics, raucous romances and some bonkers fun with BMX bikes this comic reimagining is all for one and every man for himself!

This is the first visit to Eastbourne from this acclaimed production team and their Five-star adventure comedy is expected to bethe must-see theatre event of the season.  A re-telling of the French classic The Three Musketeers, this two-hours of swash-buckling comedy gold invites you to join hot-headed d’Artagnan as he travels to Paris to become a musketeer, armed with only a baguette and his questionable steed. Will things go to plan? It’s unlikely!

Performed with just a cast of four in their own inimitable style, the company take on 40 characters, 50 different outfits and 112 costume changes as Alexandre Dumas’ 700-page historical classic is condensed in to two hours of mayhem and madness.

Al Dunn, co-artistic director of Le Navet Bete said: ‘This is a Musketeers unlike any other. It has all the elements of an epic story that we have turned inside out and put our chaotic comic spin on to make the show burst off the stage – literally!  We’ve got the best creative team we’ve had to date behind us on this so expect big laughs, unexpected characters and a night at the theatre you’ll never forget.’