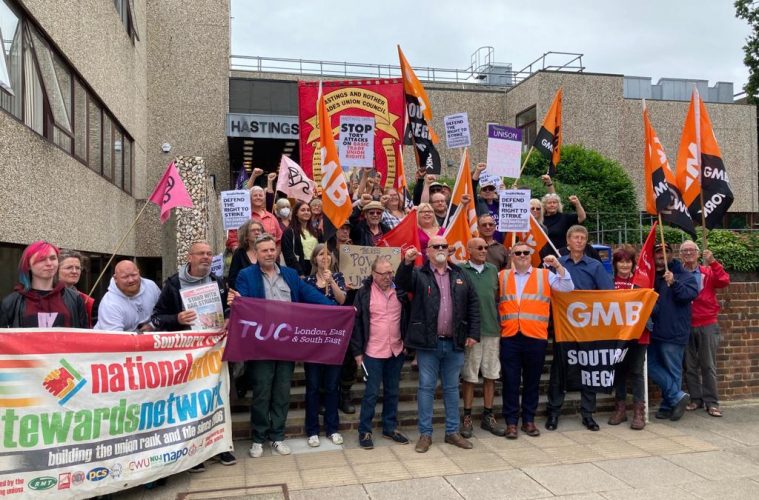 Opinion: Can we stand together against laws that attack our human rights?

Opinion: Can we stand together against laws that attack our human rights?

Three GMB workers were in court this week for peacefully protesting against poverty pay for refuse workers in Wealden. I attended a small demonstration outside the Court which was to show support for these three as I believe they had done nothing wrong. No details of their case can be discussed now as they are due to stand trial in November. But I believe it is in all our interests that we start to recognise how those in positions of power are seeking to control dissent.

It is hardly surprising that there is widespread dissent across the country right now. For it is not unreasonable for somebody who works full time to expect to be paid enough to afford the basic essentials in life. But in Eastbourne, prior to the pandemic one in three children were living in households where they couldn’t afford basic essentials. Yet less than 5% of people in the town were unemployed in 2020.

It is also not unreasonable to expect that everybody should pay the right amount of tax. Yet we know that the wealthiest of individuals and businesses can afford to set up complex arrangements to avoid or evade tax.

It is also not unreasonable for people to expect that the money they pay in tax and national insurance should be spent on providing for the population.

It is unacceptable for nurses, teachers, refuse workers, hospital cleaners and many more to live with below inflation wage increases. Especially when MPs have awarded themselves a pay rise of £15,000 since this period of austerity began in 2010.

If it was unreasonable for us to have such widespread anger at the way our country is run, then logical debate and explanations could be used to quell that anger.

Instead many of those who have been on strike, including our refuse workers in Eastbourne, have claimed the local authorities have lied about the issues. The RMT workers have accused our Government of lying about their issues.

Laws have also been passed that would allow police to arrest those who peacefully protest. Laws have been passed which may limit how we can use judicial reviews to fight against decisions we believe to be wrong. In our NHS the new Health and Care Act has removed the need for competitive tendering. Nobody could now take the Sec of State for Health to Court for handing large contracts to friends and family as happened under Matt Hancock.

Also in our NHS we had something described as the Naylor report which means in law if NHS buildings are underused they must be sold off. We need to remember this if we are offered the choice of having treatment provided in the private sector. This could in time mean we lose our NHS services.

Our Government is also set to take Britain out of the European Court of Human Rights which many British people have used to fight against Government policies that attack their rights.

We need to look at all of this and accept these are all issues that don’t just affect somebody else. It is only by standing together for a fair and just society for all will we be able to ensure a better future for this country.