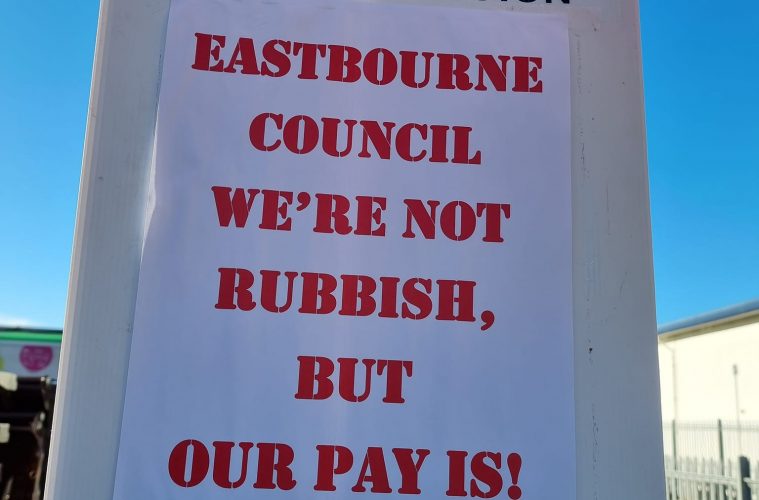 Day 3 of the GMB bin collection strike is Monday 10th January. Support may perhaps be wearing a bit thin for some Eastbourne residents who have Friday collections and have been tempted to buy into the Lib Dem Council spin.

The strikers have, from the start, expressed their regret that they considered they had no choice in taking strike action having first raised their issues in early November. It took 7 weeks for the bosses to come to the negotiating table and then ONLY after strike days were announced.

Pushed into talks, the Council bosses then finally agreed to meet with the union on 22nd December. But the GMB drivers heard not one word back in 9 days, and so the first day of the strike went ahead on 31st December. Instead of getting on with it and taking the talks seriously, it seemed Eastbourne Borough Council were more intent on arranging a Baldrick-cunning-plan of replacement drivers to break the strike action. And then, when this failed, and the management drivers couldn’t get the vehicles across the picket line, the council went to the airways with a divisive, misleading anti-union announcement, entirely blaming the GMB strikers for non-collection that day.

Yet despite the (mis)information from Eastbourne Borough Council, there was much support for the strikers. Their terms of fair pay and decent working conditions were seen as reasonable. Having had their pay kept down to near minimal wage, for HGV licenced work, the bin striking drivers are asking for £13.50 PH. The union was also asking for a pay rise for the non-striking bin loaders. (Now, there’s solidarity for you). The Eastbourne loaders are on £3PH less than the Lewes loaders. The strikers’ terms include better working conditions, which are primitive to say the least. 2 toilets for 88 workers. A tin hut with a drinks machine and standing room for 2. A makeshift outside smoking shelter with standing room for 4. A wash basin to clean up, or for an especially dirty job just hose down in the car park. So, very reasonable terms all round.

A second day of talks was brought forward to Wednesday 5th January i.e., 2 days prior to the planned second strike day. The EBC were quick to announced what a ‘very generous’ offer they had presented to the GMB; (disrespectfully, before even giving the strikers a chance to vote on the offer). It was at this point that the Council bosses started throwing in percentages. Deliberately, it seemed, to obfuscate the facts and to try to turn people against the strike. The 7% drivers offer equates to just £11.50. The loaders’ 3% offer equates to less than 30p PH. Hardly ‘very generous’ at all.

With the EBC’s ‘generous offer’ announcement boasting how they’d matched the nurses 3% pay rise, it wasn’t long before we saw people commenting how ‘greedy’ the strikers were being. But the nurses’ measly 3% offer was a great humiliation. They wanted, deserved, and needed 15%.

And, disappointingly, there has been some very unhelpful commentary by some Lib Dem Councillors. Commentary that seemed intent on obscuring the facts and spreading anti-union division. The overuse of unnecessary exclamation marks as if shouting out the bin

drivers are now demanding 25%! But the drivers’ terms have remained consistent from day one. The ramping up of the divide and rule rhetoric has, indeed, worked on some people who are beginning to turn away from their initial common-sense support.

Workers need to stand in solidarity with one another. We needn’t buy into the Council bosses’ spin and become divided. After a decade of wages being driven down over the past 11 years of Austerity, all low paid workers now deserve and need a pay rise. Pay rises haven’t been keeping up with inflation. Real terms wages are the lowest since the Napoleonic Wars, apparently. Now more than ever workers need to support all pay rise action. There are campaigns for Fair Pay for NHS staff. You are welcome to join us. The bin strike continues. Please hold your support.

Instead of dithering and delaying, the Council bosses should be coming to the table again and be prepared to make serious pay offers. Eastbourne Borough Council needs to meet the very reasonable terms of the strikers in full, and bring this dispute to a close soon.