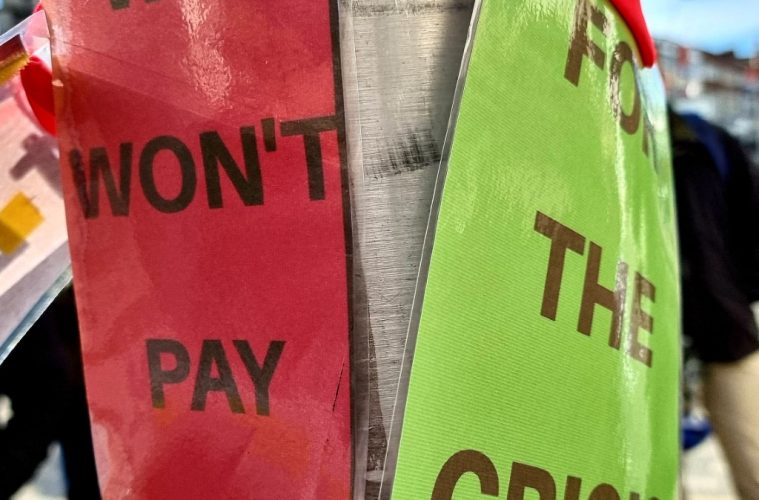 Opinion: Saturday's protest - Many Showed Up To Say Enough is Enough

Opinion: Saturday’s protest – Many Showed Up To Say Enough is Enough

The Cost-of-Living Crisis Protest in our Town on Saturday was part of a national outrage. In around 30 other places across the country.

The demonstrations were prompted by the 54% increase on energy costs; on top of rising inflation pushing up food costs; on top of the real wage declines over the last decade; and with the increase in National Insurance coming in April. It was a good turnout for Eastbourne. Lots of locals are struggling now and some wanted to be a part of Eastbourne’s PROTEST DECLARATION : ENOUGH IS ENOUGH.

The Open Mike gave up a whole range of speakers. Yes, from the usual activists. but the strongest messages came from those people who felt impelled to come forward to tell their stories. People who can’t stand by anymore without speaking out. People who are struggling to make ends meet. People who have never spoken in public before. People willing to tell their truth even though their voice shakes. People like Dani Cobb. . . . . .

“My home is *icking freezing

I can’t afford the heat

I can’t afford my *icking life

I can’t afford to eat!

It’s shyte to have these problems

While the rich are getting more

I need to get some money

It’s a killer being poor!

I used to have a good job

But it started to deteriorate

When my health took a big dip.

And now I can’t afford to live

But I’m really scared to die

I really hate this world sometimes

But I know I have to try.

Try to get myself better

Get a better paying job

When your name is Dani Cobb!

And set to get much tougher

We need to make some changes now

Or many more will suffer.

We need to cap the cost of fuel

And also tax the wealthy

We need to have some empathy

We need to all stay healthy.

So come on people listen up!

Here’s what we need to pass

We need to oust this government

Before we ALL fall on our arse!!

Thank you to everyone who showed up on Saturday. Many of you made some great placards. Lots of photos were taken. Have you seen the Protest Photo Album on Eastbourne Solidarity? Videos of the speeches were taken too. To be uploaded soon.

There will be a second wave of National Cost of Living Crisis Protests to be held in March. Followed by a third wave in April. Followed by a mass mobilisation at the end of May.

Announcements to be made shortly.