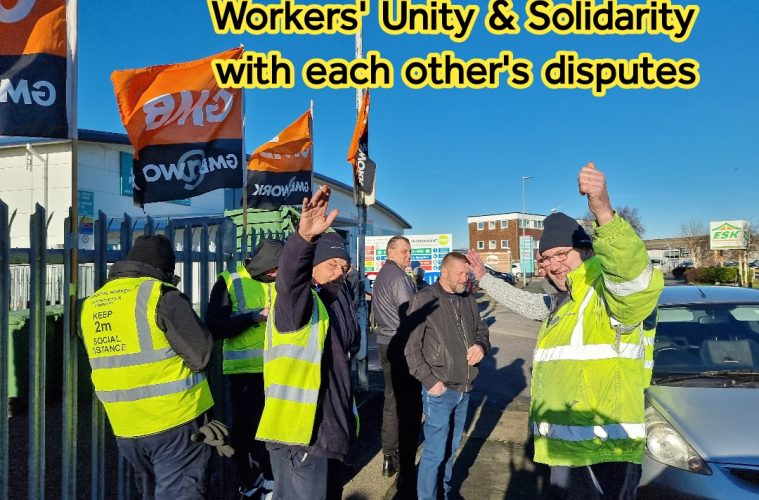 Opinion: TIME FOR UNITY WITH ALL LOW PAID WORKERS’ DISPUTES - Solidarity with the Eastbourne bin strikers

Opinion: TIME FOR UNITY WITH ALL LOW PAID WORKERS’ DISPUTES – Solidarity with the Eastbourne bin strikers

I’ve been noticing on various posts about the Eastbourne bin drivers’ strike, the anti-union flavour of some of the comments. Indeed, it seems to me that the Eastbourne Borough Council bosses’ announcements seem set on encouraging such anti-union feelings. In amongst the Council information is the weaponized, ammo-loaded rhetoric. The “demanding” strikers. The GMB who are “targeting” towns like Eastbourne. The law-breaking strikers, preventing the good workers from working. The strikers rejecting the “very generous” Council pay offer etc, etc.

I’ll declare my interests now. I am solidly in favour of the unions. I agree, wholeheartedly with my union Unite’s General Secretary, Sharon Graham, when she says, ‘We Must Build Popular, Working-Class Power’. But why is this necessary and how to do it?

THE WHY. There are now increasingly more and more workers joining the ranks of the low paid. And. With the escalating cost of living crisis, workers’ low pay is now bringing them into the poverty pay group. Think on it. Needing to work harder and harder to be in more and more poverty.

This is what 11 years of the Tory and Tory/Lib Dem Austerity measures have brought us. Handbag economics nonsense that Osborne and Cameron (aided and abetted by the establishment interested press and media) had drip fed to voters through our screens. And before long, had many people unquestionably repeating, each and every time it was pointed out how the country was falling apart with lack of investment in our public services and lack of investment in its people. Thatcher’s TINA swallowed hook, line and sinker. There Is No Alternative. You lot must suffer and be grateful.

Out there on the streets of Eastbourne, Eastbourne Anti Austerity activists were regularly accused of being “cuckoo”, “living on cloud nine”, believing in fairies, and the “magic money tree”. Scoffed at with questions “where do you think the money’s going to come from?” “Who’s going to pay?”

Well, we now know all too well, who it was that ended up paying for all that Austerity that was going to save our country. It was the low paid. It was those already financially struggling. That’s where the worst impact of all those cuts went. And disproportionately so to women; those living with disabilities; the poorest elderly; black and brown people and those from ethnic minority backgrounds. Austerity was always designed to punch downwards. It was always designed to enrich the rich. Grotesque wealth has been amassed by the very few, whilst the majority have carried the financial burden. Nurses turning to food banks. Single parents doing 2 or even 3 jobs. Elderly people huddled in blankets afraid to turn the heating on. Kids without a winter coat as they need to be fed. I’m not making this stuff up.

So many people have been brought to their knees. And with a massive fuel cost hike due in April, who will be proportionately worst affected? You got it, the majority of those already struggling to make ends meet.

THE HOW NOT TO. I’ve been noticing it creeping in. Workers becoming divided. The Council’s anti-union spin becoming echoed across the various online discussion platforms. Locals incited almost into becoming disgusted with exclamation marks. The obviously clear-cut case of the need for fair pay and working conditions for bin workers, unwittingly becoming eroded, one piece at a time by other unsuspecting workers: –

“Who do the GMB Union think they are that they can turn up in our town and stand in front of our bin lorries stopping staff from our council doing their job!! It’s crazy,” “That is just ridiculous, how can they turn down 7%?” “Disgusting the 7% should be enough for them!” “Disgusting ………. give people that want to work their jobs”. “Disgusting when nurses only got 3%!!!”“Their claim for this is pure greed and at the end of the day who will foot the bill – the people of Eastbourne?” “Greedy!” “Be grateful”. And so, it goes on.

THE HOW TO. But. Stop a moment and think about it. In whose interest does workers being divided serve? Isn’t it obvious by now that workers need to stick up for each other? Nothing was ever handed over without a fight. Do we need any more evidence that our common plight is we are on a downwards financial spiral? We must start standing in solid unity with each other’s pay disputes. The whole country’s low paid need a pay rise. Not just here in Eastbourne. The road will become a lot bumpier. We will either sink even further, or we can start swimming in formation.

Let’s take heart. There are many people in Eastbourne who understand the need for fairness, and who understand solidarity. And, This unity is coming from right across the party-political spectrum.

“The Council used the 3% NHS pay rise as an example of why they were being ‘generous’ but didn’t mention that although the vote to strike from the NHS staff was a no go, the vote to continue to fight for the 15% was yes and is ongoing”

“7% of rubbish pay is rubbish. Don’t let the deliberately introduced percentages fool you”

“Erm…RPI hit 7.1% in November and forecasted to return there in the 1st quarter of this year, so 7% is effectively a pay cut!”

“Are EBC really arguing that the Governments’ poor treatment of nurses is a benchmark for all employers in all circumstances? This is a Lib Dem council saying, “we are proud to treat our workers as badly as the Tories treat nurses”

“I fully support the workers in their strike for better pay, terms and conditions. They do a hard frontline key working role which is an essential service. The work is hard, dirty and thankless”

“EBC can end this dispute by taking the strikers terms seriously and offering decent pay rises. Instead, they are more intent on making anti-union announcements to turn people against the strikers”.

“Shame on Eastbourne Borough Council. Solidarity with the workers “

“As a resident whose bin is full, I am quite prepared to put up with the inconvenience so that these essential workers are paid a decent living wage, so they can feed their families,”

“If anybody else feels they are being underpaid in their job or not being treated fairly at work, get a union rep, they are just there to protect workers’ rights and you don’t have to be a dustman to use them!”

As a union activist, I fully echo the final quote above. Yes, workers, join a Union. And I’ll throw in a plea to all. Please. Realise the power we have in standing in unity with each other’s pay disputes. However difficult each of our circumstances may be, please don’t be tempted to point the finger angrily at those being forced to take their disputes to a strike.