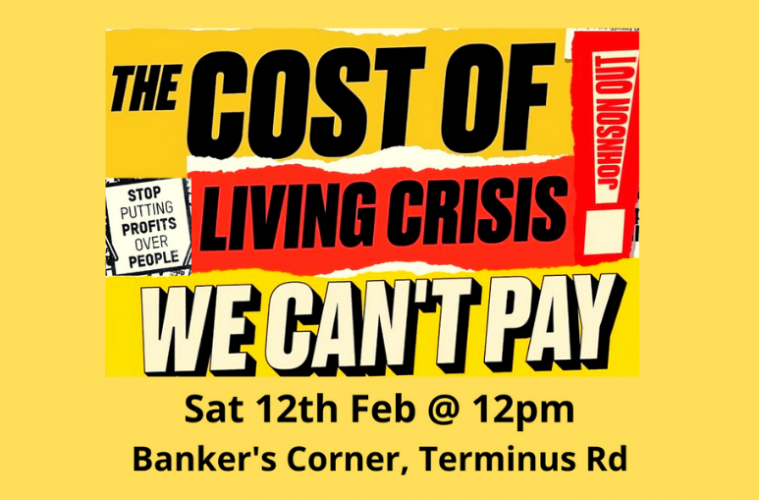 There is an ever-deepening Cost of Living Crisis Many of us in Eastbourne will be hugely adversely affected. Many people will find it increasingly more difficult to manage. Many will struggle. It doesn’t need to be this way. Everyone should be afforded a decent standard of living. Today, Eastbourne is just one of around 25 other places across the country that are holding protests to say enough is enough.

£94.1 billion was paid out in dividends to shareholders of UK companies in 2021. That’s an increase of 46.1% on the previous year. Shell has just announced highest profits in eight years. That’s up 1258% in last quarter alone. MPs’ pay will be going up £2000. Meanwhile many workers have faced a real wage decline over the austerity years leading to rapidly declining living standards. Whilst the majority are being ever more financially squeezed, the already rich minority are seeing their grotesque increases in their wealth.

We can end poverty by putting PEOPLE BEFORE PROFIT

*One in three children (4.2 million) are now living in poverty. That’s a figure close to record post- war levels.

*OFGEM have announced a 54% rise in household energy bills. This new rise is happening in April when National Insurance goes up too.

* National Insurance due to rise in April

* Food prices up 18% – disproportionately affecting those on low incomes

*At Foodbanks we are seeing Emergency food parcels up 33%

* Create Green Transition jobs and a

Insurance, this disproportionately affects low income. Tax the rich instead.

* Public Social Care sector, free at the point of need

*Get the private sector out of the NHS