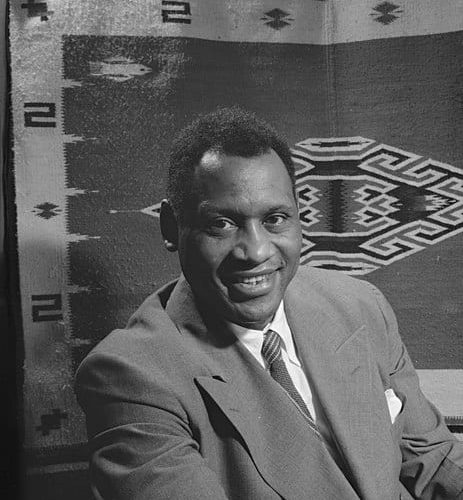 Paul Robeson Will be Celebrated and Commemorated in Eastbourne!

Paul Robeson Will be Celebrated and Commemorated in Eastbourne!

The Engels in Eastbourne Project has been busy behind the scenes on various radical history campaigns. Working with Eastbourne Borough Council and others, one such campaign has successfully secured the planned for opening of a commemoration Paul Robeson Room at the Winter Garden.

This is where he frequently performed. A bass baritone singer. he sang at the Winter Garden at least 10 times between (1929 to 39). Sell-out audiences of 2000 people. Standing room in the aisles. Hundreds of disappointed fans left in the queues outside.

As the Eastbourne Chronicle noted on 17 August 1935, Robeson talked of his love of coming to Eastbourne to the audience at the Winter Garden at the conclusion of his concert

“Whenever I come to Eastbourne, I always have lovely audiences, and it pleased me greatly to know that the songs you like best are also my favourites.”

More on the opening of the Paul Robeson Room will be announced soon.

Meanwhile, Call Mr Robeson – A Life in Songs with Tayo Aluko is coming to Eastbourne in November folks!

Paul Robeson (April 9, 1898 – January 23, 1976) was a true ‘renaissance man’. An all-American baseball player. A lawyer. World famous bass baritone singer. And let’s not forget my absolute favourite, he was one of the greatest civil rights activists of his time. Tayo Aluko is a singer, performer, activist, and Paul Robeson expert. He has travelled around the world performing Paul Robeson shows. We are absolutely over the moon delighted that Tayo and his show ‘Call Mr Robeson : A life in Songs’ is coming to Eastbourne in November to The Grove Theatre, (beneath the town’s library, near the Station).

Tickets are now on sale.

Hope to see you there. It will be a fabulous evening.