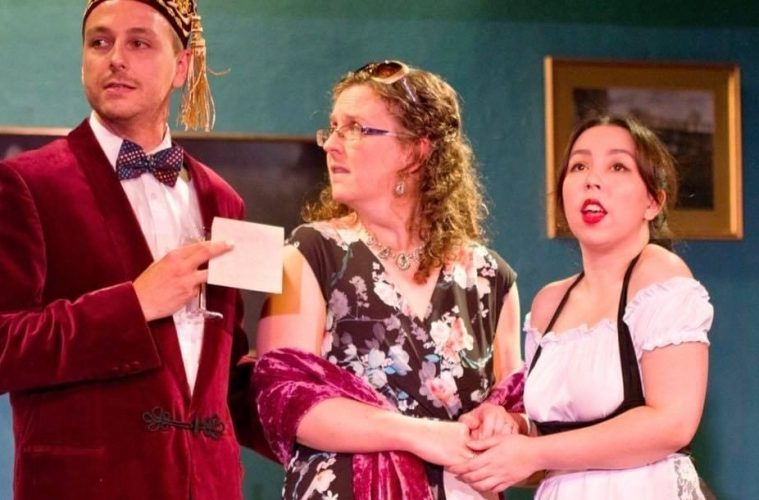 Polegate Drama Group, returning after a two-year covid break, received prolonged applause from an appreciative audience following their performance of Agatha Crusty and The Murder Mystery Dinner.
Derek Webb’s comedy, which began a four-day run on Wednesday, gathers momentum after a slow moving start.
Jane Parratt excels in a parody of crime writer Agatha Christie, as does Tristan Goddard, playing clueless Nigel Braithwaite, who is so engrossed in a themed murder mystery dinner party that he cannot comprehend when two real murders occur.
Director Helen Griffin assembles an enthusiastic cast of eleven who benefit from Jim Dobell’s well designed set creating the sitting room of Geoffrey and Caroline Robertson’s remote Victorian house.
The Robertsons are holding a dinner party to celebrate the tenth anniversary of Mighty Midget Vacuum Cleaners, jointly owned by Geoffrey and Tim McArthur, who are joined by employees and their partners.
Geoffrey has also invited Agatha Crusty (pronounced Croosty), who is promoting her latest book.
What starts as a fun evening turns into a tense experience, with a bad storm causing the nearby river to flood, leaving them all cut off. During a power cut, one of the guests is murdered. The others were all in a different room so who could have done it?
Jane’s husband Ian Parratt shows great stage presence as critical boss Geoffrey, while Andy Napier also impresses as Tim, who spends his time either drinking or leering at women.
Adam Riggs, convincingly playing IT expert Duncan, Yvonne Corbishley, as sexy PA Nicola, and Geoff Shoreman, as Financial Director Martin, help create the change in atmosphere from digs about petty company politics to the fear of murder. There are also vital contributions from Sarah Hole, Sue Talmadge, Alicia Jay and Denise Rose.
Polegate Drama Group will be presenting their 50th pantomime Cinderella in January.