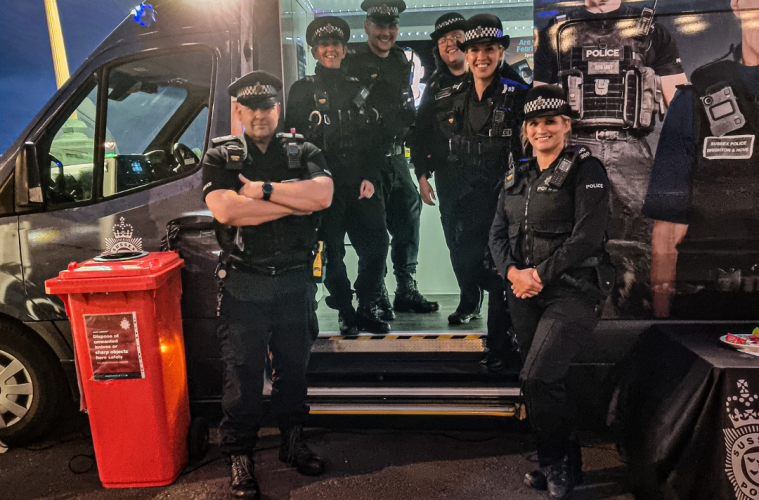 Sussex Police joined forces across the country last week for Operation Sceptre, a national week of action alongside our community partners to tackle knife crime and raise awareness of the dangers of carrying knives.

Officers carried out a huge range of engagement activities and days of action throughout the county between May 16 and 22, to complement our year-round activity of education, engagement and enforcement on knife crime and serious violence.

Dozens of knives were seized, multiple people arrested and thousands of members of the public were spoken to about knife crime.

The latest figures show that knife crime is decreasing in Sussex, where recorded knife offences in the year up to September 2021 stood at 51 per 100,000 people. The national average is 91 offences per 100,000 people, in the 19 forces who use the same methodology of reporting.

Here are some of the highlights from across Sussex.

Officers arrested 16 people as a direct result of proactive action through Op Sceptre, including two individuals who were wanted by police in relation to other matters.

Seventeen knife sweeps were conducted by Sussex Community Search volunteers, resulting in one knife and seven other weapons being recovered, as well as two more arrests.

Over 2,500 people were engaged with in meaningful, prolonged conversation around knife crime. These interactions came through the engagement van being positioned in busy areas – including in the night-time economy with a focus on violence against women and girls – as well as visits to schools and the continued staffing of our engagement hubs at The Level and in New Road.

Eighty shops were visited to provide educational material, check on areas of presentation and methods of sale, and put measures in place to prevent theft of knives.

Test purchases were also carried out at 13 shops by underage volunteers, with three failures.

Thirteen knives and six other weapons were deposited anonymously in the amnesty bin at John Street Police Station.

East Sussex officers carried out 28 searches during the week and conducted ten knife sweeps at locations across the division.

Targeted sweeps took place in public areas, but also at two schools in Eastbourne where officers checked for hidden weapons, engaged with pupils and consulted with staff and site managers around security measures to prevent the acquisition and hiding of weapons.

On Monday (May 16), a report came in of two teenagers with a machete near Tesco Express in Hailsham. Op Safety officers working on Op Sceptre responded, identified suspects and found them at their home address. A search of the property found a large kitchen knife, £6,500 of cannabis, £2,500 cash and items associated with the preparation and sale of drugs. The investigation is ongoing.

Seven weapons were recovered from a property in Hastings including two butterfly knives, two flick knives, a zombie knife, a throwing star and a Samurai sword.

Around 1,500 students at Bexhill Academy were spoken to and educated in conjunction with our partners KnowKnives, a youth support service delivering early intervention around knife crime.

In total, five people were arrested as a direct result of Op Sceptre action for a range of violent, weapons and drug offences.

In West Sussex, 150 weapons were seized by officers or voluntarily surrendered during Op Sceptre week.

Officers also visited 17 schools across the division, engaging with and educating around 1,200 students, as well as delivering safety advice to teachers and staff around knife crime.

Together with Sussex Community Search Team, three knife sweeps were carried out at knife crime problem areas in an attempt to find secreted weapons and offer a visible, reassuring presence.

Proactive work was also carried out alongside British Transport Police at Worthing Railway Station using knife detection equipment and a drug detection dog, which resulted in cannabis being seized following a stop and search.

“Tackling an issue as complex as knife crime requires teamwork and a joined-up approach with all of the agencies in the Violence Reduction Partnership.

“Last year alone, over 3,000 children and young people received support from our partnership interventions aimed at lowering the harm caused by knife crime and targeting the root causes of such behaviour.

“Op Sceptre is a great opportunity to showcase that partner working, but I must stress that Sussex remains a safe place to live, which is backed up by a knife crime rate that is decreasing ahead of the national average.”

“Operations like Sceptre show how effective results can be achieved whilst also providing a sombre reminder of the potentially life-changing and deadly consequences of carrying a knife.

“Carrying a knife is not a safety guarantee. It just puts you, your family, friends and those around you in danger. Think first and lose the knife, not a life.”