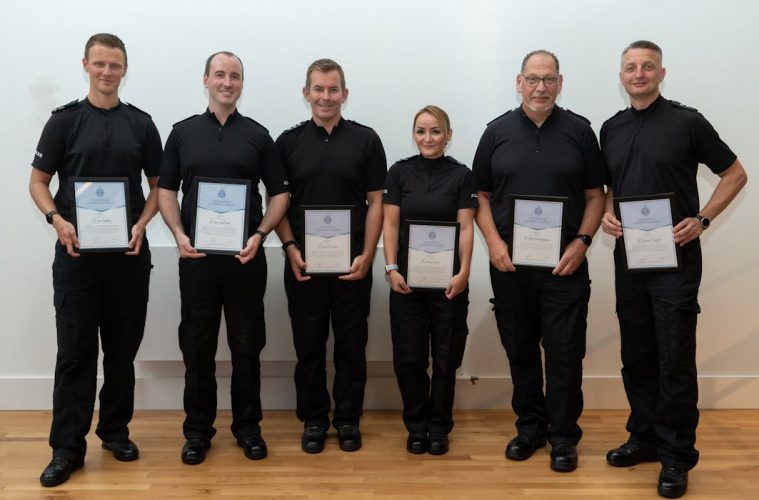 The hard work, dedication and bravery of police officers, staff and members of the public in East Sussex was celebrated at an awards event this week.

The ceremony was held on Monday (September 20) at The Welcome Building in Eastbourne in front of family, friends and dignitaries including East Sussex Lord-Lieutenant Andrew Blackman.

Awards were presented for a variety of reasons including complex and in-depth investigations, tackling organised crime, impactful community engagement and life-saving actions.

Chief Superintendent Tanya Jones, divisional commander for East Sussex, said: “This is an opportunity to recognise excellent work, which comes in many forms, whether it is acts of courage, tenacity in our response to victims and complex investigations, saving life and the overall essence which is commitment to public service and doing the best that we can.”

Seven officers were commended for their role in disrupting a significant supply of drugs into East Sussex. Through their proactive work, the officers seized 128 kilograms of controlled drugs with an estimated street value of £2.1 million pounds.

Eleven officers were also recognised for disrupting an extensive and nationwide criminal enterprise creating and selling cannabis ‘edibles’. The team put in long hours, which led to the eventual seizure of 1,000 bags of cannabis sweets and Class A drugs.

Police officers and staff were also acknowledged for their work in a complex fraud investigation involving more than 60 victims. Their dedication to the investigation saw two men plead guilty and be sentenced to a total of nine-and-a-half years.

As well as serious criminal investigations, officers were acknowledged for their work in responding to and identifying crime in our communities.

PC Cieran Gaymer was commended for his actions to arrest a man who had fled the scene of a serious collision on a push bike. PC Gaymer first gave chase on foot before commandeering a bicycle to catch up with and arrest the suspect. A member of the public also received an award for his role in apprehending the prolific and dangerous suspect, who has since been jailed.

PCSO Daniel Brian-Davis was one of a number of PCSOs recognised for their good work using local knowledge to identify and report suspicious and criminal behaviour. PCSO Brian-Davis gathered intelligence around vehicles and a person of interest suspected of being involved in drug-related activity. The vehicle was later stopped and searched, with drugs and weapons found within. The driver was arrested and a further search of his home found Class A drugs, giving a total street value of around £36,000.

PCSOs Sarah Hunt and Claudia Wood were also praised for their dedication to protecting at-risk and vulnerable people in Hastings and Rother. PCSO Wood identified a property housing vulnerable adults that was being consistently targeted by criminals seeking to defraud residents. After completing the initial investigation, she worked with partners to secure funding for a night security guard and gave the residents prevention advice, helping them feel safer and reassured. PCSO Hunt was also recognised for her commitment to protecting those in need and identifying those causing harm in the community. She displays great dedication to solving issues of crime and anti-social behaviour, making a real difference every time she goes out on patrol.

John Akines, a member of the public, was commended for his incredible bravery which saved a man’s life in Newhaven. John had seen a man fall from a boat at Denton Island and rushed to his aid, keeping him afloat in the water for nearly 30 minutes while rescue teams fought against the tide to reach them. The man went on to make a recovery thanks to John’s exceptional and selfless actions.

Police officers also received awards for instances where they have supported people in distress, including PC Will Bayley and PC Chris Franklin-Lester who helped a woman intending to harm herself in Eastbourne. PCs Bayley and Franklin-Lester showed great compassion and spent time building a rapport with the woman, and their intervention and swift actions likely saved the woman’s life.

Lord-Lieutenant Mr Blackman said: “It is fantastic to hear the stories behind the awards. What you have all displayed is the best of human nature. As Lord-Lieutenant of East Sussex I am the Queen’s representative for the county and I know her majesty would be as proud as I am to hear these stories.”