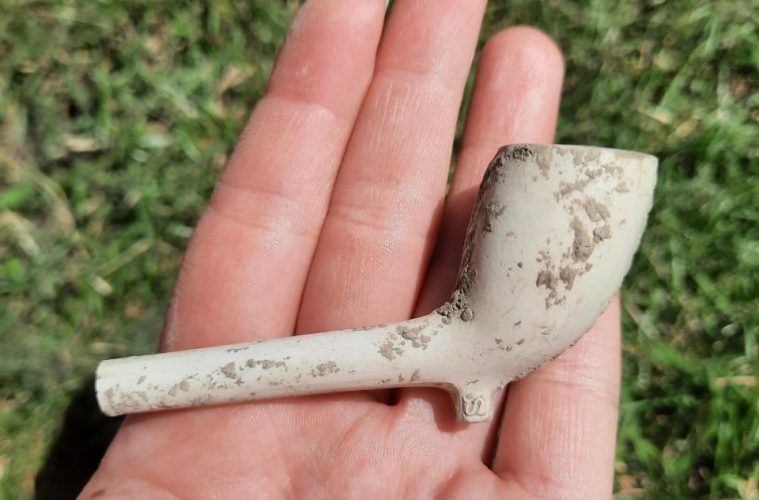 A clay pipe dating back to the 1800’s and 2,000-year-old pre-historic pottery were some of the items uncovered during a recent excavation at Motcombe Gardens in Eastbourne.

The dig was run by Heritage Eastbourne and took place in the Dovecote and gardens in Old Town during a twelve day period in July.

The team, helped by volunteers, discovered the original floor – believed to date back to the 1300s – inside the Dovecote, alongside pottery which also included an onion bottle from the 1600’s that likely used to contain wine or spirits.

Eastbourne Borough Council Lead Cabinet Member for Tourism and Enterprise, Cllr Margaret Bannister said, “This summer’s excavation has been an exciting continuation of last year’s projects which had to be put on hold when lockdown restrictions began.

It has been wonderful to gain further insight into this fascinating part of Eastbourne’s past and with finds ranging from an onion bottle, dated to around 1690, and a clay pipe from 1800 – 1820, to prehistoric pottery that is more than 2,000 years old, it really is an interesting mix!”

The successful excavation revealed a range of previously unmapped discoveries including an unexpected wall running underneath the buttress of the Dovecote with a large vent or opening of some kind, along with an old drain, either from the end of the farm’s lifetime in the Victorian era or from when it was first made a public garden in 1909.

A masonry ‘lump’ near the Bowls Lawn was also revealed to be part of a building that stood in the 17th Century on the edge of the water.  The pond is now only a fraction of the size of the original fish pond or lake.

Nearly all stonework from the building was ‘robbed out’ by the late 1600’s, so the building is thought to be considerably older.  Its location at the water’s edge suggests an association with the water, however it is hoped that the analysis of the findings may reveal more about its purpose.

The excavation was the final phase of a project organised by The Friends of Motcombe Gardens which has been funded by the National Lottery Heritage Fund, The John Jackson Charitable Trust and the Councillor’s Devolved Ward Budgets.

Earlier phases of the project saw Heritage Eastbourne investigate other areas of the Dovecote and the farm which once stood on the site.

This excavation saw a large number of new volunteers sign up and Heritage Eastbourne welcomed back many of the existing volunteers.

Volunteers undertook excavation, finds processing and stewarding roles over the twelve days and spoke to hundreds of visitors.

Heritage Eastbourne would like to give a huge thanks to all volunteers, both new and existing, for helping to create such a successful excavation.

Heritage Eastbourne organises at least one archaeological project each year to uncover some of the hidden stories from Eastbourne’s past as well as a host of other courses, workshops and events. For more information visit: www.HeritageEastbourne.co.uk