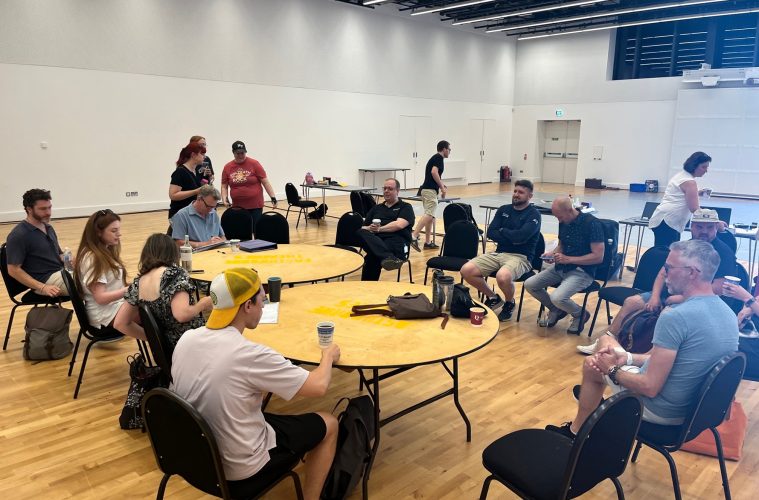 Rehearsals BEGIN for Around the World in 80 Days

Rehearsals BEGIN for Around the World in 80 Days

AROUND THE WORLD IN 80 DAYS

The cast and creative team from Around the World in 80 Days assembled in Eastbourne for the first time this week to begin the creative process of getting this hilarious comedy from the page and up onto the Devonshire Park Theatre stage for opening night on Friday 5 August.

This almost herculean task is one which doesn’t daunt the experienced Eastbourne Theatres in-house team, who have worked on numerous in-house productions since they began producing back in 2001.

A brand-new show produced exclusively for Eastbourne, Around the World in 80 Days is sure to be a hilariously funny theatre experience, it even had the cast and in stitches at the initial round-the-table-read-through! With a whopping 37 scenes, 107 characters plus even more costumes than that and 100’s of sound and lighting ques this production is technically very challenging and will stretch the creative talents of this extraordinary team.

The cast, which has been hand-picked especially for Eastbourne includes, the dashingly handsome Nicholas Maude as indomitable hero Phileas Fogg plus Ben Cutler as faithful valet (and quite acrobatic) Passepartout, Ben Roddy as doggedly determined Inspector Fix and Freny Nina Pavri as the perceptive heroine Mrs Aouda. Plus a supporting team of 3 actors, Hannah Boyce, James Cooney and Harry Hart, who between them all have to recreate over 100 other roles!

Think that’s intimidating – try being in the shoes of the costume department, Shelley Stevens costume supervisor said “We’re going to be really pushing it with this production, I’m going to be experimenting with high-strength magnets for some of the quick-change garments. This show is completely crazy and it’s going to be great fun we are really looking forward to getting stuck-in!”

The director Chris Jordan said: “While there might’ve been a few sleepless nights about the logistics of just HOW we’re going to recreate this incredible journey literally across the globe all on the Devonshire Park stage, I speak on behalf of everyone when I say it feels so utterly fantastic to be back with a company of actors who are a dream to work with, and a creative team which features some of the best in the business. This re-birth for Eastbourne Theatres summer in-house productions is going to be something very special.”