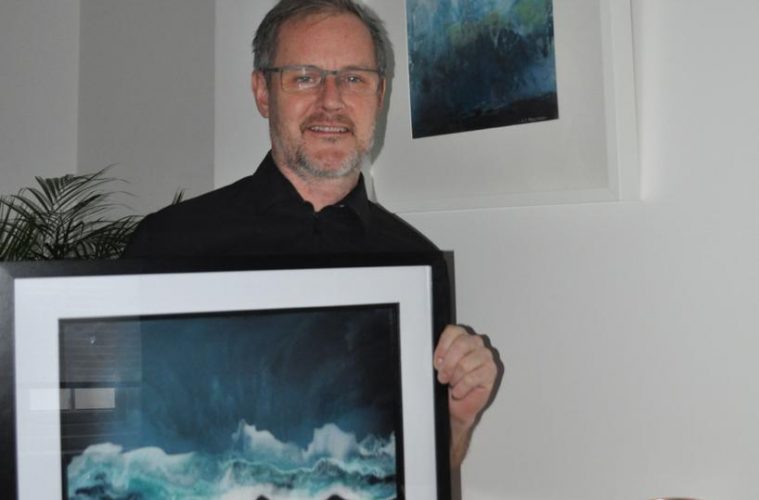 An Eastbourne man has changed his outlook on life thanks to finding his calling during lockdown.

Justin Rollings, 53, who lives in the Meads area of Eastbourne, has overcome a turbulent few years, made even tougher during the covid-19 pandemic, by creating stunning abstract seascapes using resin.

Having graduated from Wimbledon School of Art in 1999, Justin has always enjoyed being creative. But the necessity to make a living meant Justin focussed his attention on a managerial career in media and marketing.

Justin said, “I’ve always been creative, and it never really leaves you, but that took a bit of a back seat while I made a career for myself. I would dabble with creative things every so often, upcycling furniture and starting little creative DIY projects, but it was never enough to pay the bills and was more of a hobby or pastime.”

However, in 2019, Justin was made redundant from his job following a merger.

Justin continued, “Losing my job was incredibly tough. I had some personal things going on and had recently bought a flat in the Meads. At that time, there weren’t many jobs around. I got by with some DIY jobs and revisited furniture making, producing some bespoke pieces with resin inlays, but I struggled to make ends meet. It was a really tough time for me.

“But then, 9 months later, the pandemic hit, and that was even tougher. Like so many others, I really struggled during lockdown. I couldn’t work, and it was a lonely time. But keeping busy, being creative and experimenting with resin provided me with an escape.”

Having lived in Sussex for most of his life, Justin has always felt a strong connection to the sea and the dramatic South East coastline.

Justin said, “Once the first few months of lockdown had passed, and we were allowed to leave the house for exercise, I made the most of my beautiful surroundings. I visited the seafront at different times of the day to experience the breathtaking sunrises and sunsets. My calling to the sea gave me valuable time to reflect on life, and it became a sanctuary for me. I wanted to recreate a piece of this at home, so that’s when I started to create my art.”

Justin’s spare room is stocked with resin, colourings, canvas, perspex, and other types of craft materials and tools. Although Justin’s striking resin seascapes started as a hobby and a means to mental wellness, it has grown into something even more fulfilling.

He continued, “After sharing some of my work on Facebook, I was overwhelmed with supportive comments and people asking if they could buy my work. I hadn’t really thought about selling my

art because this was therapy for me. But knowing others enjoyed my art and wanted it in their homes was a great feeling.”

Justin now hopes his journey and his art can inspire others.

Justin added, “The pandemic has been awful, but I’m an example that you can pick yourself up and prioritise your mental health and wellbeing. I hope my art can inspire others to seize any opportunities that come their way and do something they love because, in the long run, it will all be worth it.”

If you would like to view Justin’s work, then he will be exhibiting at the Crown pub in Hastings from mid- March to mid-April.

His stunning seascapes are also available to buy online via his website, www.justdesigns.uk, Not On Amazon, Etsy, and at an independent retailer One Day in Battle on Battle high street