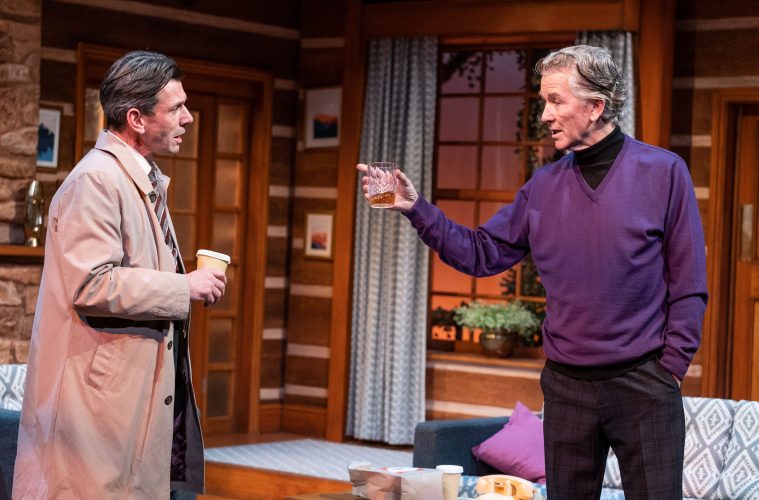 Review: Catch Me If You Can with Dallas legend Patrick Duffy

Review: Catch Me If You Can with Dallas legend Patrick Duffy

Catch Me If You Can
Devonshire Park Theatre, Eastbourne
From Monday May 9th to Saturday May 14th, 2022

Catch Me If You Can is a tense thriller with so many twists that it keeps us guessing throughout.
This play, which debuted on Broadway in 1965, can be forgiven for having an involved plot because it lightens the complexity with moments of intrigue and witty dialogue.
Catch Me If You Can, adapted by Jack Weinstock and Willie Gilbert from a French play by Robert Thomas, should not be confused with the 2002 film of the same title starring Leonard DiCaprio.
Here, in a Bill Kenwright production, we have another celebrated actor in the starring role, Dallas legend Patrick Duffy.
Duffy plays newlywed husband Daniel Corban, who calls the police to search for his wife Elizabeth who has disappeared from their honeymoon location, a log-cabin in the Catskills, well designed by Julie Godfrey.
A frantic Corban complains to Inspector Levine (Gary O’Brien) that he is not doing enough, but within days local priest Father Kelleher (Ben Nealon) brings back Elizabeth (Linda Purl), only for Corben to insist she is an imposter.
O’Brien superbly delivers often sarcastic retorts as the exasperated inspector and steals some scenes from the softly-spoken Duffy. The TV legend’s lack of stage experience makes it difficult for him to fully express the complete range of fear, frustration and bewilderment of a man trying to convince others he is not going mad.
But the charismatic Duffy shares some excellent exchanges with both O’Brien and Purl, and reacts perfectly when handed a drink that he believes to be spiked.
Purl gives a convincing performance, and excellent support is provided by Paul Lavers, Chloe Zeitounian and Hugh Futcher, who has an amusing conversation with a wall-mounted moose head.
A couple of scenes would have benefited from being more pacy and tighter, but, for the most part, the direction of Bob Tomson contributes greatly to an entertaining evening.