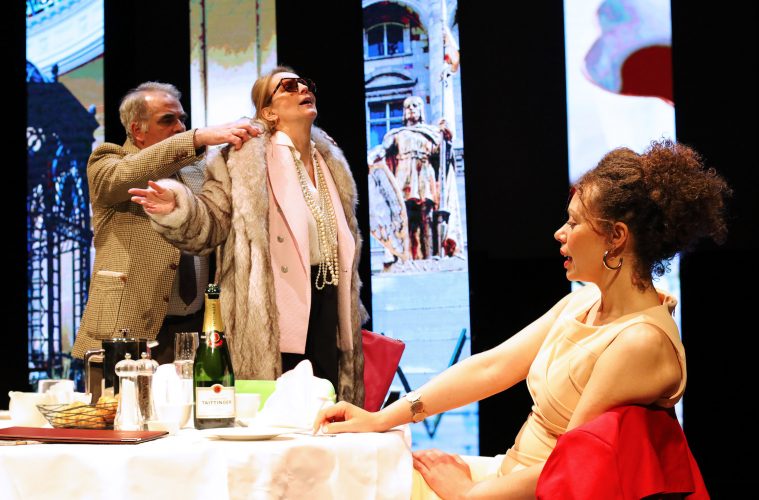 Dead Lies is a unique thriller focusing on corruption in politics, including scandal, sexual misdeeds, blackmail – and murder!
Jeremy Edwards brilliantly plays Peter George, the dynamic leader of new party People First, who promises a different kind of politics based on honesty, while desperately trying to cover up a shady secret from his past.
Best selling crime novelist Hilary Bonner provides a fascinating story, but it is too wordy. Even the script has one character being told to “get on with it.”
Cuts to the running time of almost two and a half hours would have enabled director Joe Harmston to improve the tempo.
On the plus side there are several clever twists, including a great ending, and up-to-date impropriety at Westminster, with digs at Partygate and an MP watching porn on his phone in the commons. But the story has similarities to the downfall of Jeremy Thorpe in the 1970s.
All goes well with George’s election campaign until the unexpected appearance of blackmailing former friend Marcus Cunningham, convincingly played by Peter Rae.
The MP’s outspoken media adviser Kate Compton (Alicia Charles) warns him that mixing with Cunningham could be harmful if the Press latches on to it. She has some lively exchanges with George, but there are no signs from their body language that they have had a passionate affair until it is revealed later.
Andrew McDonald and Portia Booroff are excellent as leading political journalist Alan Parfit and ‘supportive wife’ Jo George, while Clare Dyson perfectly portrays drug-taking former model Stephanie Jones.
A dedicated cast is completed by George Verghis and Neve Doyle, whose role as DI Fellows would have been more convincing had she dressed appropriately.
The production uses tall video screens to provide information in the form of TV news footage. When a systems failure prevented these screens working on Tuesday the audience was informed that the performance had to be cancelled.
But the problem was solved so that the play could go ahead for the rest of the week.