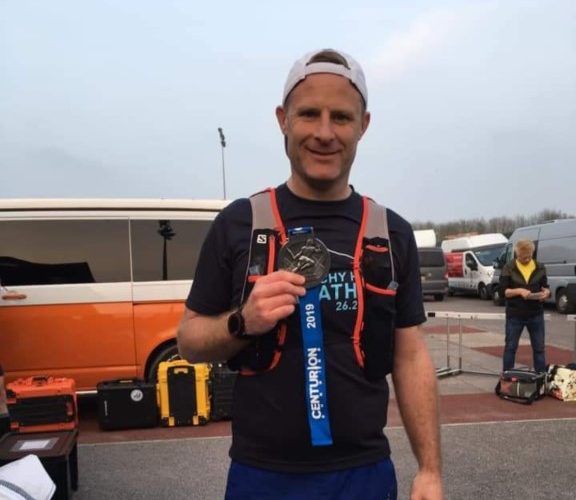 AN endurance runner will be running 32 lengths of Eastbourne Seafront in memory of his ‘good friend’ PJ for a Willingdon charity.

Paul James, a father of two, was a train driver for Southeastern Railway and also worked as an associate ambulance practitioner based in Polegate.

He was just 43 when he suffered a cardiac arrest in June last year.

Now Richard Gardiner, 44, is running 32 times from the Holywell Cafe to the Southern Water Treatment Works at Langney Point on Friday May 20.

It will take him more than 24 hours, and 32 is important because it represents the number of years Richard knew PJ.

Richard said: “I knew PJ for 32 years; we went to senior school together and then played football together for Eastbourne Fishermen’s Club.

“He was fit and healthy and always looked after himself so it came as a complete shock to hear of his sudden death.

“I was taking part in a 100-mile endurance race at the time. Needless to say, I didn’t finish that race.

“However, I then decided in memory of PJ that I would run to fundraise for the first ever time.

“I spoke with PJ’s family and we are raising money for the Children with Cancer Fund, based at The Triangle in Willingdon.

“PJ was always keen to sponsor people when local charities were to benefit, that is the kind of person he was.

“What better way to combine my passion for running along with raising money for children and their families affected by cancer.”

Richard wanted to complete the run locally rather than somewhere out of Eastbourne so people can join him for a short run too and also hopefully locals seeing him will pledge money to the charity.

He said: “I will start at 8am and I will obviously run past hundreds and hundreds of people, especially if the weather is nice in May.

“I would love people to get involved.”

To sponsor Richard, go to justgiving.com/fundraising/richard-gardiner-06

Stacey James, Mr James’ wife, said at the time of his death: “PJ was just the kindest most wonderful man who loved all of us and we all loved him. He is an inspiration to us all for his strength and love of life and that will live on in all of us. He will be eternally missed by everyone.”

Mr James was a pitch-side medic at Brighton and Hove Albion Football Club.

A spokesperson for the club said, “Everyone at Brighton and Hove Albion was extremely saddened to hear such terrible news. Paul was a member of a vital team who worked hard to provide the club with valued and essential medical support on match days at the Amex.

““He will be missed by his family and many friends, to whom our thoughts and prayers are with at this very difficult time.”