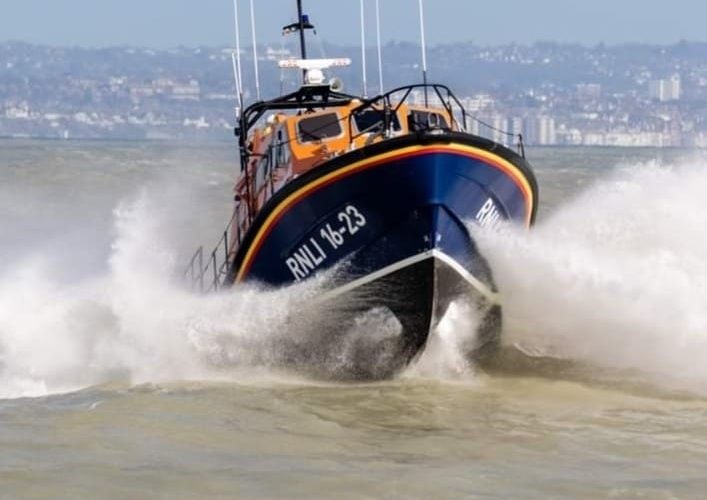 RNLI EASTBOURNE: THIS WEEK IN TIME

RNLI EASTBOURNE: THIS WEEK IN TIME

This year, 2022, marks the 200th anniversary of Eastbourne’s first purpose-built lifeboat. To commemorate this momentous date, we bring you the first of a series of historical articles, each examining a significant event in Eastbourne’s lifeboat history which occurred “this week in time”.

We will start with the wreck of the cargo ship, the “Thames”, on 3 February 1822 – the event that provided the catalyst for an Eastbourne lifeboat service.

In the early 1800s, the East Sussex coastline, with its dramatic chalk cliffs and rocky reefs, was notoriously perilous for shipping. The “Thames” was a large, 1,350-ton cargo ship of the East India Company, with 140 men and a valuable cargo on board, which was bound for China and British Bencoolen (on what is now Sumatra). The ship was not far into its voyage when, at just after midnight on 3 February 1822, she struck a rock off Beachy Head during a violent storm and was washed close to the shore at Eastbourne. Despite the dark and stormy conditions, crowds flocked to the beach, lighting fires and carrying oil lamps to provide some illumination, but they could only watch helplessly as the ship’s timber masts began to break up and huge waves continually battered the ship with tremendous violence against the rocky shore.

As daylight broke, five crew members had lost their lives in the wreck. The remaining crew were seen crowded on the deck, looking anxiously towards the shore, near the Wish Tower, as the storm raged and the waves continued their assault. A local fishing boat (the only one large enough to attempt to launch in the tremendous surf) was brought to the beach and seven volunteers – a combination of fishermen, seamen and a young Midshipman of the Coast Blockade called Francis Richard Smith – stepped forward to man the boat and attempt to reach the ship.

The Hull Advertiser and Exchange Gazette carried a report (8 February 1822) on the “loss of the Thames East Indiaman”. The newspaper reported that several attempts were made to launch the rescue boat “….. but she was each time swamped, and her gallant little crew washed ashore. Still, however, undismayed, they made another attempt, and succeeded in getting almost without the breakers, where a sea took her starboard bow and upset her. The six seamen reached the shore; but we lament to state the young sailor (Midshipman Smith) who so fearlessly risked his life for the chance of rendering assistance to his fellow men in distress, fell a victim to his undaunted courage and humanity, and the ship’s company as well as those on shore saw him struggling with the waves until his strength was exhausted and he sunk beneath them.”

The wreck was eventually secured by a rope, fired from the shore into the rigging of the ship using a modified cannon. With the rope holding fast, the surviving crew and passengers were safely brought ashore.

The tragic death of Midshipman Smith – just a few days short of his 23rd birthday – saw him awarded a posthumous medal from the East India Company for his brave part in the rescue attempt.

The wreck of the “Thames” lay on the beach close to the Wish Tower for a month before she was re-floated. Crowds of people came to the beach to gawp and, in order to prevent looting of her cargo, the ship had to be guarded by men of the Coast Blockade (a body established by the Admiralty in 1806 to intercept smugglers attempting to come ashore).

History did not record whether John Fuller, the wealthy Squire of the Rose Hill estate in Brightling, witnessed the wreck himself, but he was certainly aware of it. John Fuller was a well-known and generous supporter of local worthy causes – he had served his country as an army officer and a Member of Parliament, he was a generous benefactor to the worlds of art and science, and he was dedicated to supporting his local East Sussex community during the economic hardships during

and after the Napoleonic Wars. (Many bizarre legends have grown around his often-eccentric behaviour, which earned him the nickname “Mad Jack” – but that’s another story!)

The wreck of the “Thames”, is said to have inspired “Mad Jack” Fuller to take action – he came up with the idea of a purpose-built lifeboat to improve the chances of successful rescues at sea. He commissioned local boat-builders, the Simpson Brothers, to build a specially-adapted wooden rowing boat (appropriately named the “Samaritan”) and he gifted this new lifeboat to the town of Eastbourne. The new boat was 25 ft. long and 8 ft. 6 inches in the beam and had a rose carved on her bow. (Indeed, the boat was often referred to as “the Rose”.) It was launched by carriage and cable-chain, and rowed by 10 oars, with additional buoyancy provided by a number of 18-gallon casks lashed to the interior.

The “Samaritan” had her first sea-trial in October 1822, and this proved that the boat and its crew of volunteers – all fishermen, led by coxswain Edward Allchorn – were ready to provide Eastbourne with its first purpose-built lifeboat service. The boat was placed under the care of a Mr Noakes, the local Controller of Customs. Fishing boats at that time were often launched from an area called the Stade (a short distance to the east of where Eastbourne pier now stands) and a wooden boathouse was built here, on the shingle, close to the Coast Guard Watch-house, to accommodate the new lifeboat.

All of this happened two years before Sir William Hillary’s appeal to the nation led to the foundation of the National Institution for the Preservation of Life from Shipwreck in 1824. Eastbourne’s wooden lifeboat station and the “Samaritan” lifeboat remained independent until October 1853 when, at the request of the local Committee, they were taken over by Hillary’s National Institution (which was re-named the Royal National Lifeboat Institution in 1854).

The “Samaritan”, Eastbourne’s first purpose-built lifeboat, was finally “retired” in 1863, after 41 years of service. It was credited with saving 55 lives at sea. The crews of the “Samaritan” were largely drawn from Eastbourne’s fishing community. Those courageous men in their sturdy wooden lifeboat, open to the elements, frantically pulling on ten oars, could only dream of having access to the boats and equipment of their modern-day RNLI successors, 200 years down the line.

“Fast-forward” to 2022, and Eastbourne’s current All Weather Lifeboat, the “Diamond Jubilee”, is a Tamar-class, twin engine, self-righting vessel with steel-lined keels. She has an enclosed and elevated wheelhouse with integrated electronic Systems and Information Management technology. This All Weather Lifeboat is backed up by a D-class inflatable inshore lifeboat, the “Laurence and Percy Hobbs”, which is designed to operate close to the shore in shallow water.

Two centuries of technology have seen huge advances in the act of saving lives at sea – but the core values of 1822 are carried on to this day. The Eastbourne lifeboat crews are all local men – and all volunteers – who regularly put their own lives at risk to save others in danger at sea and on the water. Last year, throughout the bad weather and pandemics of 2021, the two Eastbourne lifeboats were launched 145 times (the “Diamond Jubilee” had 47 callouts and the “Laurence and Percy Hobbs” 98).

The RNLI remains a charity, completely independent from the Government – its income is dependent on voluntary contributions and gifts in Wills. In 2022, we celebrate the 200th anniversary of Eastbourne’s first purpose-built lifeboat, as we continue to build towards a sustainable future for the local and national lifesaving efforts of the RNLI.

Anyone interested in helping the Eastbourne Branch of the RNLI to deliver a successful 200th anniversary celebration is invited to contact Graham Leeper at the RNLI for more information. Graham can be contacted by e-mail (“grahamleeper1@gmail.com”) or via the RNLI shop/museum in King Edward’s Parade. (If the shop is not open, you can drop your details through the letterbox and Graham will contact you as soon as possible.)