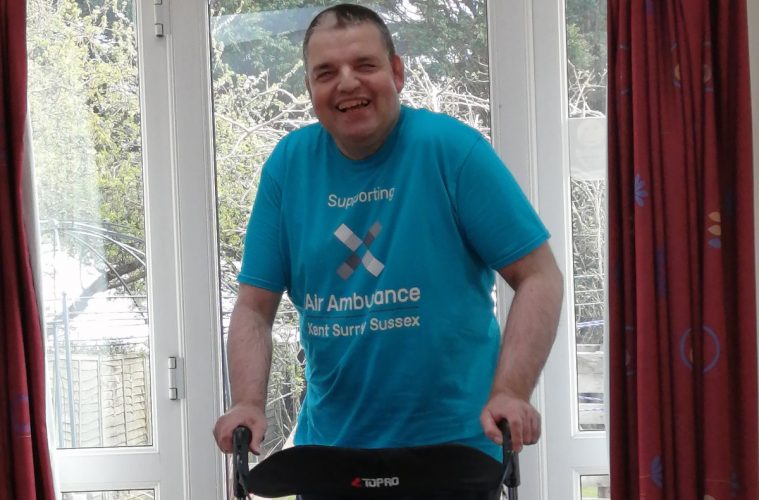 Inspired by Captain Sir Tom Moore, an Eastbourne resident is determined to tackle his walking disability through a daily routine around his sheltered home.

Robert Hammond, 48, has struggled with poor health and vision for most of his life. He was born with Cerebral Palsy, is confined to a wheelchair and relies on friends and carers to get him out of his flat in Hampden Park.

But having heard about the amazing efforts of Sir Tom, Robert and his friend and helper Paul Gray set a challenge to walk 200 laps of his block using his rollator. And as an added incentive, Robert is looking for sponsors to help him raise money for the local Air Ambulance Service.

Robert started his daily walks on April 11 and has so far completed 25 treks. “It takes me a long time to cover even a few metres. For most people, this would be easy, but for me, it is a real challenge,” Robert explained.

“I am blind and have severe walking difficulties, so it is a tough job to complete my daily walk,” he continued. “The additional walking will improve my mobility and I have the added incentive of raising money for my favourite charity, the Kent, Surrey and Sussex Air Ambulance.”

Robert set himself the initial target of raising £500, but he has already smashed this. He now wants to reach £1,500 in donations for Air Ambulance.

Paul has been taking Robert out every week for the last eight years. “Robert’s health is not brilliant and he really struggles with his walking,” Paul said. “When I suggested he should do daily walks with his rollator, I had no idea how he would react. But he has really taken to it and it’s great to see him tackling this challenge.”

Sarita Taneja, Community Fundraiser at KSS said: “We are so very thankful to Robert for all of his support and want to wish him the best of luck with his 200 lap challenge. Inspiring individuals like Robert are the reason we’re able to continue delivering our life-saving service, 24/7. It costs more than £15 million a year to sustain our service, 88% of which is raised by the people of Kent, Surrey of Sussex like Robert, without whom we couldn’t operate. Good luck Robert, we’re with you each step of the way!”

You can support Robert at www.justgiving.com/fundraising/roberthammonds