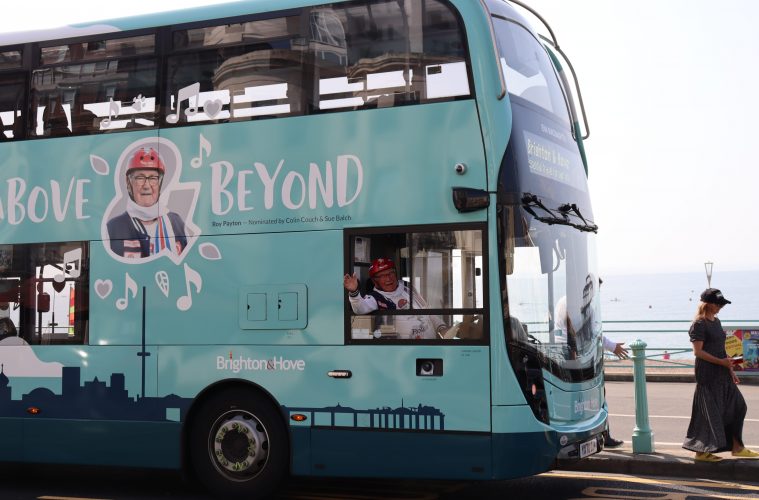 Charity fundraising superstar Roller Roy, aka Roy Payton from East Dean, recently came face-to-face with himself on the side of a Brighton & Hove bus.

As he clocked up the miles on his daily walk up and down Eastbourne seafront, Roy composed poetry in his head. This resulted in a volume of poetry ‘Poetry in Motion’, with all proceeds going to Dementia UK.

Roy is now into his second 1,000-mile odyssey for the same charity.

When he first saw himself on the side of the bus, Roy said he was so surprised he nearly walked into a lamppost.

“I had tears in my eyes. I’m a very, very proud man. It’s been an amazing journey and there’s still more to come,” Roy said.

He began raising money for children’s charities many years ago after tragically losing his baby daughter to childhood leukaemia.

At 78, he learned to rollerblade as a way to raise more money for charity. He still sometimes gets back on his skates, albeit usually holding on to a rail.

Roy’s photograph and story (told inside the bus) is part of the bus company’s series featuring 24 community champions who have gone out of their way to make a positive impact on other people’s lives. It’s called Above & Beyond.

These stories of kindness and hope appear on the sides of the bus company’s ultra-low emissions buses on route 1, between Mile Oak, the city and Whitehawk. People were nominated by community groups and members of the public.

Brighton & Hove Buses’ Managing Director Martin Harris said: “Roy’s energy and positivity is an inspiration to us all and reminds us to squeeze the most out of every day. He has spent decades making life better for sick children and cheering everyone up and we are honoured to have him on the side of one of our buses.”  .

Find out more about Roy and Above & Beyond here.