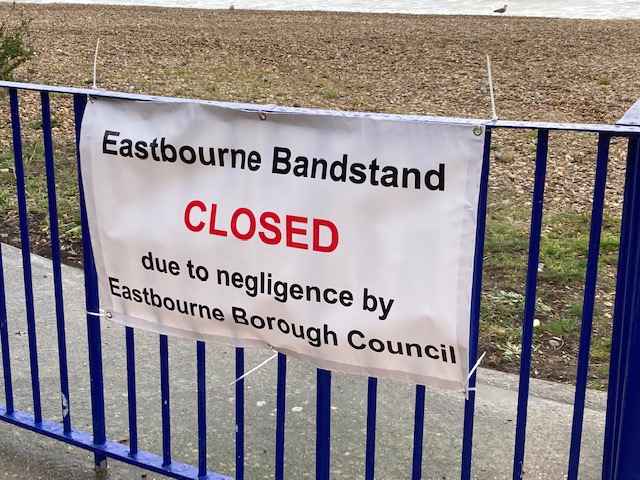 Following the rejection of Wednesday’s rescue plan for Eastbourne’s
seafront bandstand, the action group committed to saving the structure
have now labelled it as ‘closed due to negligence by Eastbourne Borough
Council’. (See attached image.)

Chair of Save Eastbourne Bandstand Action Group, Gaynor Sedgwick, spoke
at the well-attended meeting of Eastbourne Borough Council.
Raising points regarding negligence of the Bandstand, the council’s
financial position as reported in the CIPFA review report, Gaynor asked
why the current budget proposal fell well short of the 2020 agreed £3
million, which would amount to little more than a band aid.

“A debate among councillors followed. Around 30 of the Save Eastbourne
Bandstand supporters and members of the public left the room in anger
when Councillor David Tutt tried to deflect attention to the current
state of Downing Street and partygate, rather than dealing with the
issue at hand”, the Action Group posted on their Facebook page today.

Councillor Smart’s amendment to the budget was defeated, so the
Bandstand and Promenade budget for 2022/3 remains at £750k.