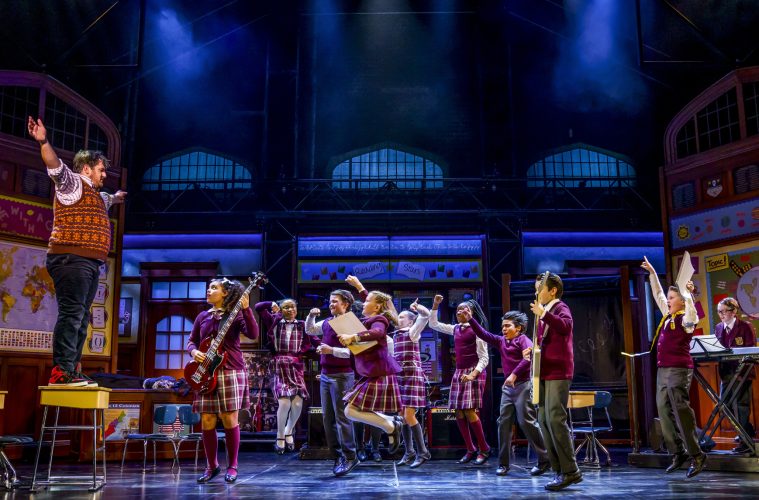 SCHOOL OF ROCK – THE MUSICAL

Based on the hilarious hit movie, this musical follows Dewey Finn, a failed, wannabe rock star who decides to earn a few extra bucks by posing as a substitute teacher at a prestigious prep school. There he turns a class of straight-A students into a guitar-shredding, bass-slapping, mind-blowing rock band – sensationally performed live by the production’s young actors every night with roof-raising energy!

While teaching these pint-sized prodigies what it means to truly rock, Dewey falls for the school’s beautiful, but uptight headmistress, helping her rediscover the wild child within.

School of Rock – The Musical features new music written by Andrew Lloyd Webber with lyrics by Glenn Slater (The Little Mermaid, Sister Act) and a book by Julian Fellowes.

School of Rock- The Musical debuted at Broadway’s Winter Garden Theatre in New York in 2015, and ran for more than three years, picking up four Tony nominations along the way.  It transferred to London in late 2016 and ran for over three year at the New London Theatre, winning an Olivier Award for Outstanding Achievement in Music.

Book now for Andrew Lloyd Webber’s School of Rock the Musical while schools out for Easter and you’ll be rocking your school holiday plans! At the Congress Theatre, Eastbourne 12 – 16 April, nightly performances at 7.30pm and 2.30pm matinees on Wednesday, Thursday and Saturday. Tickets priced from £25.50 to book call the box office 01323 412000 or online at eastbournetheatres.co.uk