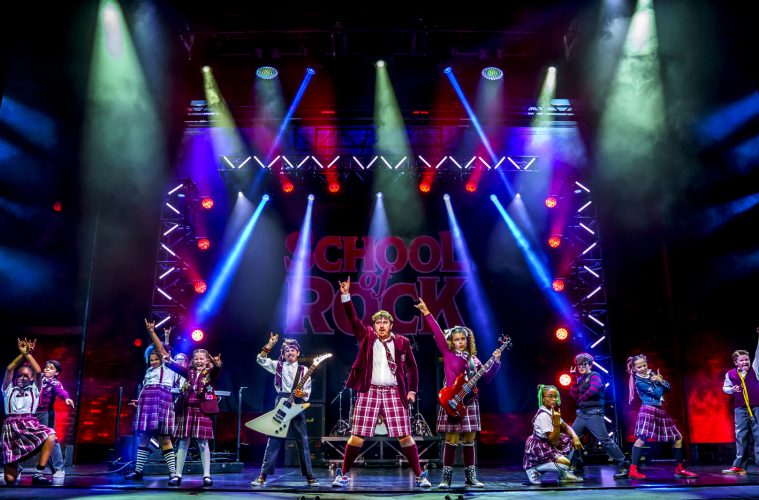 ROCK YOUR EASTER PLANS WHILE SCHOOLS OUT!

SCHOOL OF ROCK – THE MUSICAL comes to the Congress

SCHOOL OF ROCK – THE MUSICAL

Tickets are selling fast for Andrew Lloyd Webbers School of Rock – The Musical, this Olivier Award-winning West End hit show is coming to Eastbourne’s Congress Theatre in the 2nd week of the Easter School Holidays, 12 – 16 April, making it an ideal school holiday delight. Forget the Easter Eggs and instead treat your mini rockers to the ultimate music lesson!

Based on the hilarious 2003 hit movie starring Jack Black, this musical follows failed rock star Dewey Finn who poses as a substitute teacher at a prestigious private school. There he turns a class of straight-A students into a guitar-shredding, bass-slapping, mind-blowing rock band – sensationally performed live by the production’s young actors every night with roof-raising energy!

Of sharing a stage with a talented cast of children Jake Sharp who plays Dewey said: “They are so inspiring to a new generation. Lots of them have previously come to see the show and now they’re in it. The energy that they bring, the natural energy that young people have, is amazing and it’s a complete pleasure being on stage with them. It keeps the show real and raw all the time.”

Having previously played Dewey in the West End, the actor also feels School of Rock is the perfect show for right now. “It’s completely joyous,” he says. “It’s inclusive, positive and optimistic, which is what we all need after everything we’ve been through recently.”

School of Rock – The Musical features new music written by Andrew Lloyd Webber with lyrics by Glenn Slater (The Little Mermaid, Sister Act) and a book by Julian Fellowes.  It played in Broadway for over three years and received four Tony nominations. Then transferred to London in 2016 and ran for over three years, winning an Olivier Award for Outstanding Achievement in Music.

Andrew Lloyd Webber’s School of Rock the Musical is at the Congress Theatre, Eastbourne while Schools Out for Easter from 12 – 16 April, nightly performances at 7.30pm and 2.30pm matinees on Wednesday, Thursday and Saturday. Tickets priced from £25.50 to book call the box office 01323 412000 or online at eastbournetheatres.co.uk