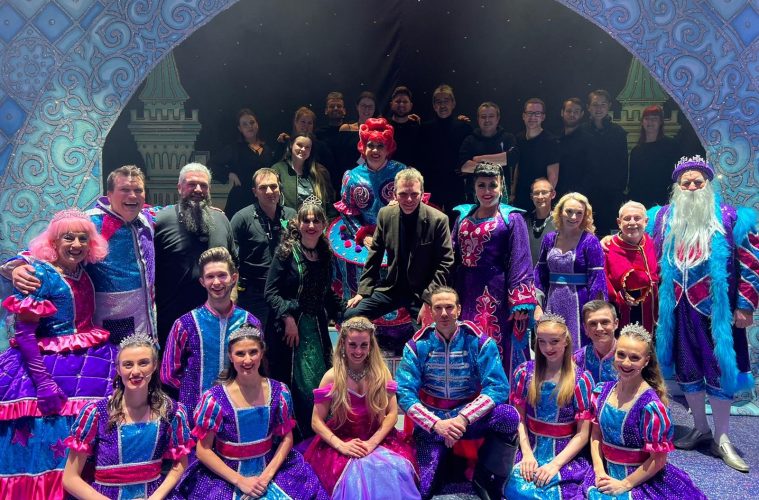 After 54 performances the final curtain came down on Sunday night on the 20th Eastbourne Theatre produced Devonshire Park pantomime Sleeping Beauty. Despite multiple cast and crew changes due to COVID-19 the show carried on, with the colossal help from the determined backstage and production team and the talents of a number of actors who were brought in at the last minute to cover illness – not a single performance was missed.

In excess of 25,500 people came to see the show, with universal critical acclaim and incredible audience feedback, there were comments including: “… the talent on stage was outstanding”(1) “… wow, it was even better than ever.” (2) and “the best pantomime in the world” (3)

The Devonshire Park Theatre is the perfect setting for traditional pantomime, each year there are surprises aplenty and this year’s show included a dreamland sequence which saw an especially made bouncy cloudscape created for Eastbourne and a huge dragon came to life aided by impressive flames and pyrotechnics to give audiences a scare.

The final performance has become known as the Secret Show in which pranks and jokes are played on the cast, the audience is in on the gags and the sold-out capacity audience on Sunday 9 January were fully involved with the shenanigans.

The deliberately chaotic final night is a show unlike the rest in the run; with surprise guests, mix-ups and gags on the cast. From stage props suddenly weighing a lot more or a lot less, unexpected items coming out of a Mary Poppins style bag (including the Production Manager Jason Willie who managed to get “stuck”), understudies turning up to surprise actors, songs changed with no warning and a brand-new scene suddenly included.

Eastbourne Pantomime stalwarts Tucker and Martyn Knight knew to expect the unexpected, but that didn’t help them! When Tucker was handed his usually empty box which suddenly contained a 12kg stage weight even he was caught off-guard and Martyn facing a rival Dame in the baking scene was a highlight – especially as the Dame in question was Chris Jordan, who also directed and wrote the show, and who stood-in for Martyn for 9 performances when Martyn was unable to perform due to COVID.

The cast were left exhausted, exhilarated and there were more than a few tears shed at the relief of reaching the final performance.

With box office takings well in excess of £500,000 the pantomime has been a huge success and boost for Eastbourne Theatres. Despite difficult conditions and facing what might’ve been considered insurmountable challenges the team rose to the occasion and kept the show going no matter what.