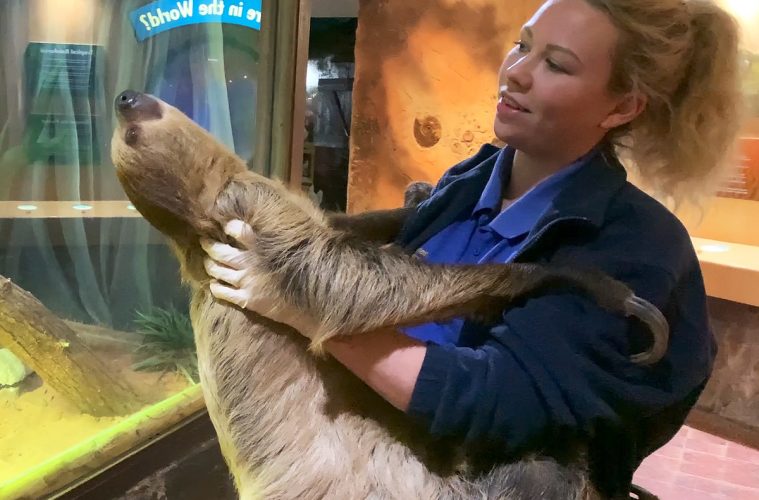 A sloth named Gordon at Drusillas Park in Sussex, has become so besotted with one of his keepers, Amelia Jones, that he now refuses to get out of bed until she cradles him like a baby and takes him on a mini zoo tour.

The unlikely friends started the adorable morning routine two years ago, when Gordon began behaving differently around Amelia than he did with all the other keepers.

Amelia talks about how it all started: “When I first started working with our sloths, I was actually a little bit intimidated by them, they are powerful animals and I used to keep my distance. Gordon lives with our hand-reared sloth, Flash, and Flash is very confident around humans and often acted like the boss with me. However, Gordon took a very gentle approach with me, like he knew I was nervous, and would slowly come to where I was, peer at me sweetly, and patiently watch me carrying out my duties.”

Gordon seemed to sense Amelia’s nerves and took it upon himself to make Amelia feel more at ease by showing affection towards her by encouraging interactions between them.

“It’s quite a normal part of everyone’s routine to carry our sloths from bed to their on-show enclosure in the mornings, but I noticed more often that Flash would happily take herself into the enclosure without my help and only Gordon would need picking up. I then noticed some mornings, even if Gordon had already moved to his enclosure, when he saw me, he would go back to bed and wait for me to pick him up!”

When Amelia cleaned their enclosure each day, Gordon started climbing down onto the floor to where she was and would pick up the bucket and sponges as though he was trying to help, which is highly unusual behaviour, and was seemingly reserved for Amelia alone.

“I thought this behaviour was normal, but when I mentioned it to the other keepers, they actually didn’t believe me! They all said that he kept himself to himself and didn’t have any interest in them. It was only when some of them walked past whilst it was happening that it stopped them in their tracks as Gordon really was crawling around on the floor with me – as he did every morning”

As Gordon helped Amelia’s confidence around sloths grow, and knowing they are very curious creatures, Amelia started to extend their walk between enclosures to visit the neighbouring animals. Before long, Gordon would start to lean his body and steer Amelia towards the animals to carry out what had now become a routine.

“The day I realised I had accidentally created a routine with him, was one morning when I was in a rush and only had time to walk him quickly to his enclosure. When I put him down, he started pawing at me and pulling my t-shirt and acting really grumpy. And he stayed in a grumpy mood with me the rest of the day. That’s when I clicked that he’d expected his normal tour and was very unhappy it didn’t happen!”

Gordon and Amelia’s special bond continues to grow, and their morning cuddle and zoo tour are now a firm fixture on the daily to-do list.

“Gordon is a really special, sweet boy and it’s a great privilege to work with sloths, so to experience the unique relationship we have developed is a real honour.”

Drusillas are hosting an online sloth birthday party on their socials on Friday 22nd April to raise money for The Sloth Conservation Foundation – with a chance to win a sloth close encounter experience. There will be a live stream of Gordon and Amelia’s morning routine at around 9am.

Located just off the A27 in Alfriston, Drusillas Park is open daily from 10am, with plenty of Easter fun to be had this holiday. For more information, please telephone 01323 874100 or visit www.drusillas.co.uk