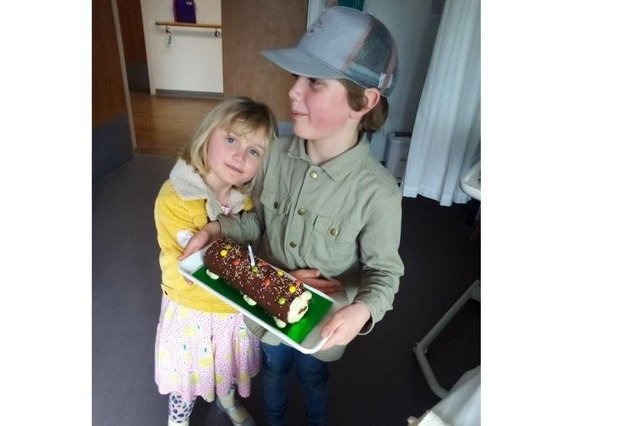 A quick-thinking Healthcare Assistant at local hospice, St Wilfrid’s, was recently able to help out when a mum wanted a birthday wish fulfilled for her son.

Jack Sumners turned 7 this week and he and Mum Claire, who is a patient at the hospice, had discussed going to Drusillas Park as a birthday treat along with sister, Tilly. When Claire’s condition deteriorated and it became clear that she wouldn’t be able to make the trip, Healthcare Assistant, Donna Gittings called on local organisation, Pet Pals Therapy.

Donna said: ‘On Saturday, when it became apparent that Claire wouldn’t be able to visit the zoo, my colleague, Alex, suggested we have a tea party for Jack in Claire’s room. And I thought it would be great to get some animals involved, too. I remembered Beck from Pet Pals Therapy who had visited a nursing home I previously worked at. She brought a number of small animals on her visits and the residents would have them on their laps and pet them. Their faces really used to light up and I wondered if Beck might be able to help.

‘I gave her a call and left a message for her on Saturday. She called me back on Monday – the day of Jack’s birthday – and said that though she had three bookings for Monday afternoon, she would cancel them and come to the hospice for Jack’s birthday. When I told Claire, she was so happy, she burst into tears. The children had gone with their dad to Drusillas in the morning, so we got a caterpillar cake and organised a little tea party for the family in the afternoon. After that, Beck brought in a baby goat and lots of chicks. Jack’s face really was a picture, and the two children had a lovely time interacting with the animals.

‘It was so kind of Beck to help out in this way, creating wonderful memories for the children and finding an alternative way of helping Claire to celebrate her son’s birthday.’

St Wilfrid’s Hospice looks after over 2,300 patients and family members every year. While care is free, it costs over £17,000 a day to provide. If you would like to donate, please go to stwhospice.org/donate.