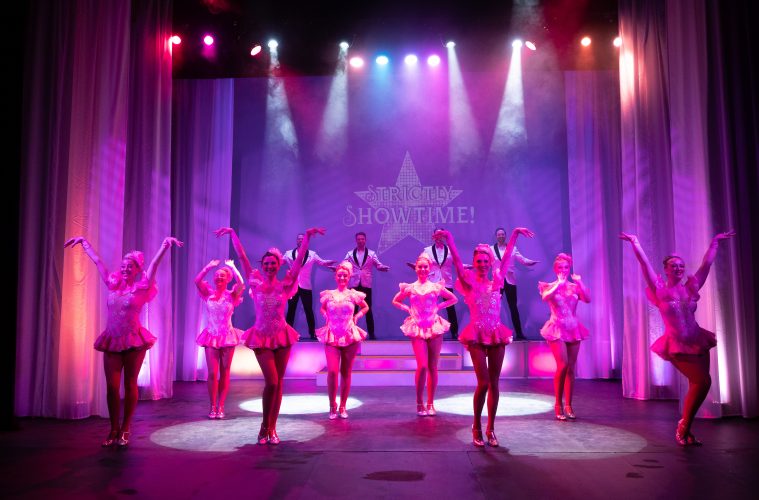 The Royal Hippodrome’s Strictly Showtime! is a dazzling summer variety production with something for everyone.
No wonder it has a family feel good factor because it is produced by husband and wife team Alex and Debbie Adams, with Alex also directing and having a starring role, while Debbie provides excellent choreography.
Add to that the superb vocals of another husband and wife, Barney and Paula Pout, who take time off from their gigs as Duality to deliver some scintillating duets and solos, including tributes to Dusty Springfield, Whitney Houston, Neil Diamond and Matt Monro.
The show is fronted by Grant Martins whose bubbly personality enables him to fully engage with the audience as he combines song and dance with comedy.
A fantastic company of local professional performers make it a show that keeps on giving.
Star Bray earns prolonged applause for her breath-taking rendition of Wishing You Were Somehow Here Again from The Phantom of the Opera – a real show-stopper – and her pulsating tribute to Tina Turner with River Deep Mountain High.
There are other excellent performances by Laura May Sivers, Thomas Hackett and Nick Hollands, both as superb soloists and as group performers. I particularly enjoyed Laura, Paula, Star and Eliza Hackett’s tribute to The Nolans with I’m In The Mood For Dancing, Laura’s lovely Unexpected Song, Thomas’s L.O.V.E. and Nick’s Moon River.
Alex and Grant show great chemistry in comedy routine Two of a Kind, as do Alex and Laura with I Won’t Dance and Thomas and Star with The Song That Goes Like This.
Grant then emphasizes his talent as a singer with a captivating version of Barry Manilow’s Even Now.
Sarah Barden, Nikki Brook, Darcie Bennett, Emma Walker and Eliza Hackett give marvellous support with their invigorating dancing and singing.
The full company perform some great numbers, starting and ending the show in style with Night on the Town from Copacabana and Oh What A Night!, paying tribute to Frankie Valli and The Four Seasons/Jersey Boys.
Strictly Showtime! is every Wednesday at 8.15pm (no matinees) from May 4th to October 19th.
* Debbie and Alex Adams are the proprietors and principals of the Trapdoor Theatre School in Eastbourne, providing musical theatre training for children aged three to 18.