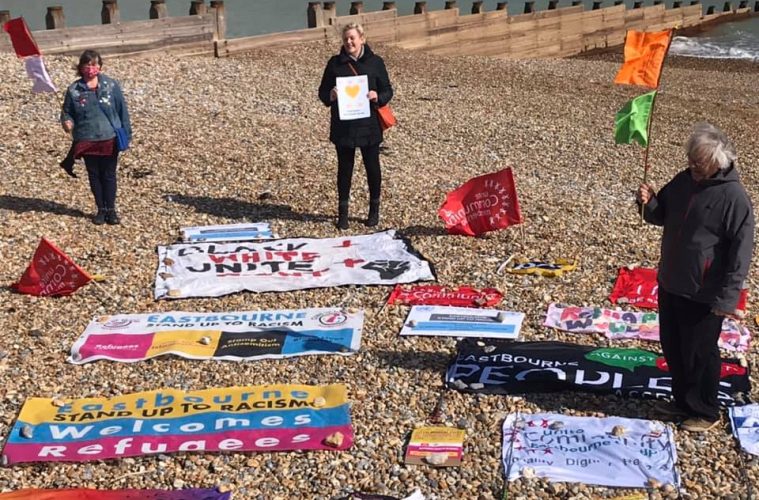 Eastbourne Stand Up to Racism (EBSUTR) officially launched with a beach banner drop on Saturday as part of #World Against Racism day of global protest.

The safe socially distanced beach banner drop was well supported with lots of interest and positive comments from members of the public.

There were banners from different community activist groups including the Eastbourne Trades Council, Eastbourne Greenpeace, Unite the Union, Eastbourne Unite Community, East Sussex Save the NHS, Eastbourne People’s Assembly, the Public and Commercial Services Union (PCS) the United Nations Association Eastbourne branch, and two colourful Eastbourne Stand Up to Racism banners alongside hand-made placards and banners which made a very impressive and eye-catching display on the shingle.

Local resident and one of the group’s founders Louise Walton said: “It was really great to meet people that we had been working with virtually on zoom in real life, at a safe distance of course! And it was great to meet so many people who were genuinely pleased we had set up the group. We are extremely pleased our launch was so successful and that we have reached out to so many great anti-racists in Eastbourne.”

Tyler Vanko, a student at Brighton University based on the Eastbourne campus joined the group on the day.

Tyler said: “I’ve always wanted to be part of something that can make a positive difference for future generations. Last year has taught us how important it is to educate and share our personal experiences of racism and help those who sadly can’t help themselves and fight this battle on their own. We are all human beings after all and we should all treat each other equally. I’m grateful to Stand Up to Racism for allowing me as a young student to do exactly that.’

Local resident Graham Dean said: ‘It was brilliant to see so many colourful banners and flags on the beach at Eastbourne marking the setting up of EBSUTR group. There was real solidarity in everyone attending, in a Covid safe way. We are all determined to show support for vulnerable refugees desperate for help after fleeing war, persecution, or torture. Anyone suffering racism should know there many people in Eastbourne prepared to stand with them against intolerance.’

In order to ensure the banner drop was covid safe there were no speakers on Saturday so EBSUTR hosted a meeting on zoom on Sunday with a variety of speakers, poets and singers around the theme of Eastbourne Welcomes Refugees. Attendees heard from a refugee from Kurdistan living in Eastbourne, who told of the journey his mother had taken with three small children across 4 countries to get here to be with their father who had fled from torture.

The weekend’s events were part of anti-racist actions across 20 countries including hundreds of events in the UK. There were also lively events in Brighton and Hasting.