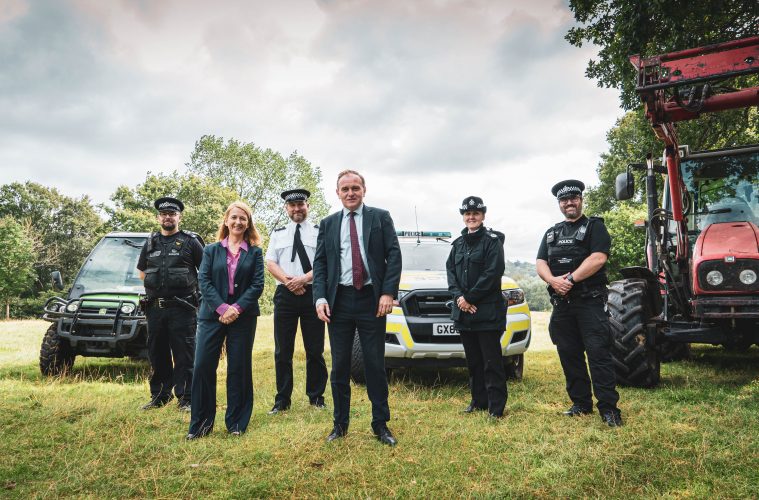 Sussex PCC Katy Bourne has been involved as a member of the Government’s Pet Theft Taskforce and has now welcomed key recommendations outlined in the report published this week.

She said: “The new pet abduction offence will reassure pet owners that Government and police take pet theft seriously. I am delighted to see the Taskforce recognise that pets – and dogs in particular – are more like family members than property for most owners and the emotional impact of having a pet stolen is a driving factor in proposing a specific offence of abduction.”

Mrs Bourne was delighted to introduce the Sussex Rural Crime team to DEFRA Secretary of State George Eustice MP when he visited Sussex yesterday to launch the Pet Theft Taskforce report. He commented that: “reports of a rise in pet theft have been worrying. Pet owners shouldn’t have to live in fear and I am pleased that this report acknowledges the unique distress caused by this crime.”

Rural Crime Team members  Inspector Oli Fisher and Sergeant Tom Carter talked the Secretary of State through Op Collar and recent operations into dog theft and puppy farming, highlighting the enormous sums that criminals were making with desperate families handing over sometimes thousands of pounds in cash in car parks and laybys to secure a puppy. They explained how the lockdown-driven demand for dogs had made stealing or breeding from them temptingly lucrative for criminals.

DC  Sharon Rintoul gave an update on a case following the recovery of 10 dogs by detectives from Crawley with ongoing work to identify their owners whilst a suspect has been released under investigation.

Other key recommendations in the Taskforce report will see the Home Office work with police to ensure pet thefts are recorded in a consistent way with data more easily shared across forces and through the Criminal Justice System. There will also be improvements to the recording of pet ownership and transfer of ownership with more information stored on the current 16 dog microchip databases and a single point of access created for the data.

The Pet Theft Taskforce’s recommendations are part of the Government’s plans to make the UK a global leader in animal welfare  and new measures to tackle illegal smuggling of dogs and puppies.

Katy Bourne added: “I am very grateful to our farm owner hosts for allowing ACC Jayne Dando and Sussex Police to showcase the Rural Crime team and for welcoming the DEFRA visitors. Sussex residents can be reassured that they have a dedicated unit committed to tackling wildlife, heritage and environmental crime, dog theft and animal exploitation.”

You can read more information in the DEFRA press release and taskforce report and watch a short video of the PCC welcoming the news.