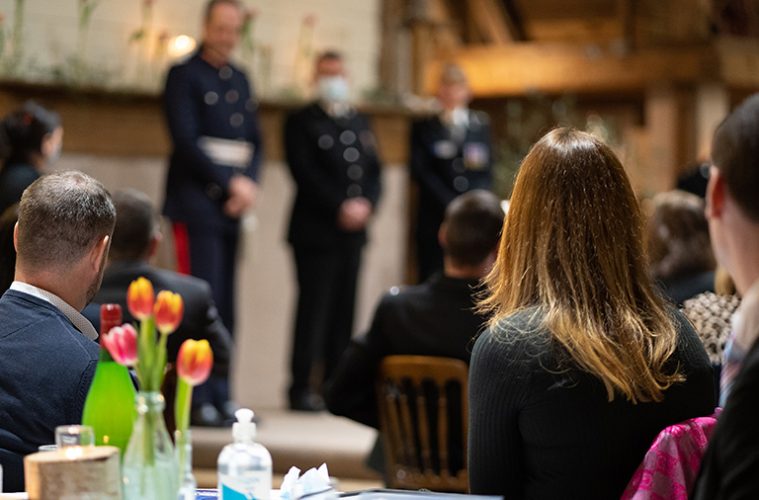 Sussex Police has started the year by recognising some of the outstanding achievements and contributions of its officers and staff.

During a special ceremony on Wednesday, January 19, led by Sussex Police Chief Constable Jo Shiner, awards were given to those who have shown exceptional bravery and commitment, and to those who have dedicated their careers to serve the public.

A total of 64 people received awards at the event, including 11 Chief Constable Commendations for those who have been involved in an incident with significant personal risk or danger, or have undertaken an exceptional action or piece of work. 53 people also received recognition for their long service to the force.

PCSO Tara Reid received a Chief Constable’s Commendation for the support she provided to a vulnerable homeless adult who was being attacked by a group of youths. While off duty, she discovered the victim and found he had been stabbed. PCSO Reid provided emergency first aid and safeguarded him from further harm until additional support arrived. This was a significant act of bravery and selflessness while also displaying great courage.

One recipient of the Chief Constable Commendation, Detective Superintendent Stuart Hale, also received the prestigious Royal Humane Society award. Given only to those who demonstrate acts of bravery when saving or attempting to save someone’s life, Detective Superintendent Hale was recognised for saving a motorcyclist’s life while he was off duty.

In 2019, a van pulled out of the Ditchling Common Industrial Estate into the path of a Harley Davidson. Superintendent Hale stopped and undertook CPR on the injured rider for almost 15 minutes and, just before doctors arrived, a pulse and shallow breathing commenced.

Detective Superintendent Hale said: “I was extremely grateful for the thorough and regular training in administering CPR that all police officers receive which meant, when I and others needed to use it to save the motorcyclist’s life, I was able to advise them on what to do and take the lead in giving mouth to mouth.

“There were so many members of the public who stopped to help, directing traffic, seeking the assistance of emergency services, helping administer first aid and comforting witnesses who were distressed. They too should be recognised for their help in saving this man’s life.”

Detective Constable Andrew Roe received a Chief Constable Commendation following the sentencing of Neville Crouch, 65, from Preston, who was jailed for a total of 26 years in 2020 for a number of sexual assaults against children in the Littlehampton and Goring-by-Sea areas during the 1980s and 1990s.

DC Roe was praised for his tenacity and ability to engage with people during a highly complex investigation, spanning five decades and different counties. The Judge formally commended DC Roe for his investigative diligence and hard work, supporting victims to give evidence and relive harrowing events which took place many years ago.

DC Roe said: “I’m proud to have given those who had suffered the most horrendous abuse a platform to speak at court; ensuring that Neville Crouch will never again be in a position to take somebody’s childhood from them. I was well supported by my department and by my counterparts in Lancashire Police who assisted me with the case. A special thanks must go to Moira Tierney from the Sexual Offences Investigation Team who scrutinised and helped prepare court paperwork to ensure the best case was put forward. I’m thankful for the bravery shown by the victims and witnesses and the trust they put into the process and Sussex Police.”

Louise Crawford too received a Chief Constable Commendation in recognition of her passion and enthusiasm as HeforShe Programme Manager. Louise was integral in the development of the first annual report into gender equality within policing and established a legacy whereby police leaders across England and Wales are held accountable in relation to gender equality within their organisations.

Louise said: “I am so proud to work for Sussex Police and be a part of the HeForShe movement. Gender equality is such an important topic for policing and a huge amount of work has been done to address gender imbalances within policing. For Sussex Police, achieving a place on The Times Top 50 Employers for Women was evidence of this. We are passionate about creating an inclusive culture, removing barriers to progression and having a workforce that is representative of our communities; the HeForShe movement has provided policing with a platform to engage all of the workforce in discussions on gender equality and accelerate change.”

Chief Constable Jo Shiner: “I am always incredibly honoured to present awards to people who go above and beyond to protect the public, catch criminals and work hard to ensure Sussex is a safe place to be.

“Attending the ceremony and hearing the extraordinary things our officers and staff do to protect others was incredibly humbling. I expect everyone who works within Sussex Police to deliver an outstanding service; therefore it is important, and right, that we recognise and reward those who achieve this and undertake acts or activities which they would argue is, quite simply, their job.

“And for those officers, staff and specials whose long-service within our force too must be admired. Their selfless dedication to their duty demonstrates their commitment to public service and I am immensely proud to call them my colleagues.”