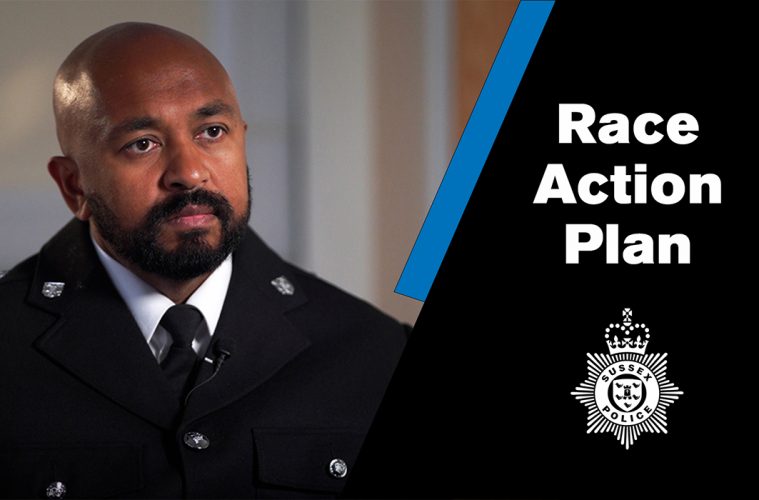 Sussex Police has today (May 24) welcomed the publication by the National Police Chiefs’ Council (NPCC) and College of Policing of a national Plan of Action on Inclusion and Race, which aims to address race disparities affecting Black people and change a legacy of distrust.

The plan sets out how policing, as a collective, will work to address the discrimination, bias, and racism, which exists in police systems, policies and processes, and that policing cannot currently fully explain. The plan focuses on tackling discrimination against Black communities as the most disproportionately impacted, evidenced by national data. While disparities may not necessarily always be a sign of discrimination, police forces must understand their causes and urgently reform how they work where bias exists.

Deputy Chief Constable Julia Chapman comments: “We fully commit to the national Plan of Action on Inclusion and Race and welcome publication of the plan today, marking the start of a national commitment to build an actively anti-racist police service which reflects and protects all communities.

“While much has been done by policing to address racism in the police and society, with policing now being more inclusive, more diverse, and more reflective of our communities than ever before, it is our view that policing does still contain racism, discrimination, and bias. Whether that’s in the behaviours of some officers and staff, or in the policies and procedures we operate.

“It’s important to understand that we are not characterising policing or saying all of our officers and staff are racist. Instead, we are saying that we recognise, alongside overt instances of racism which are unacceptable and must be tackled, that there are areas of policing where there is still a negative disproportionate impact on Black people and therefore, we, as Sussex Police, commit to being a Force which is anti-racist, will remove unconscious and conscious bias, and be one which people can trust, particularly those within the Black community.”

The national plan accepts that while significant steps to address racism in the police and in society have been made, change has not been fast or significant enough and therefore has identified four key areas where police forces need to improve, including in force culture and inclusion, use of police powers, community relations and engagement, and protection from victimisation.

Sussex Police already has significant work underway in these four areas to help achieve its aim of being an anti-racist organisation and to improve the confidence of Black people and other ethnically and culturally diverse communities.

Working with the Sussex Police Race Action Group and Race Equality Network, the force has developed a new Equality, Diversity and Inclusion strategy, using the knowledge and lived experiences of the network to help identify organisational challenges of ethnically diverse staff and officers as well as challenging policies and processes. In February 2021, Sussex Police also signed up to the Business in the Community Race at Work Charter, demonstrating its commitment to improving both workforce representation and the experiences of Black colleagues.

To help facilitate open and honest conversations around race and inclusion, the force launched an internal training programme in September 2021. Through the Government’s Operation Uplift, the national drive to recruit 20,000 additional police officers, alongside other recruitment activity, a targeted approach has been taken to ensure that the force represents the communities it serves. With 3.7 per cent of the workforce identifying as ethnically and culturally diverse, there is more work to do to reflect the demographic make up of Sussex.

While the national plan was being developed, Sussex Police has designed a localised delivery plan which will be launched in June and seeks to address disparities both within the Black community and also other ethnically and culturally diverse communities so that the force better meets the needs of the people who live in Sussex.

Force Champion for Race and Inclusion, Superintendent Adam Hays, said: “We have already taken steps as a force to address some of the disparities highlighted by the national plan as we recognise that without taking immediate steps to improve policies and procedures, public trust and confidence in policing is affected and our work to protect people from all backgrounds is less effective as a result.

“We aim to build on these steps taken so far, as it is not enough for us to say we are ‘not racist’, we must translate both the national plan and our local delivery plan into action and real tangible difference.”

The national plan will be subject to further independent scrutiny with the public, police officers and staff and experts invited to share their views before it is finalised in December 2022. For anyone wishing to help shape the final plan, a national survey has launched alongside the national plan and can be found here.

Further information about the national Plan of Action on Inclusion and Race is available on the NPCC website.