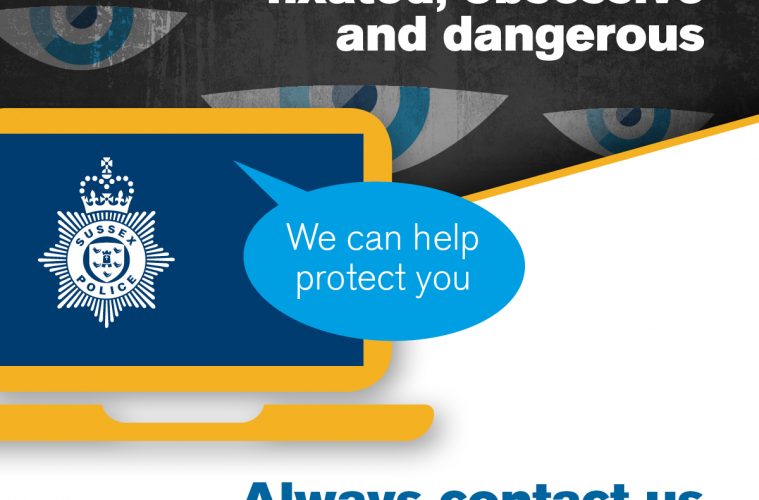 Sussex Police continue to lead the way on stalking protection

Sussex Police continue to lead the way on stalking protection

Police in Sussex have led the way in enforcing a new law aimed at helping victims of stalking that came into effect just one year ago.

Stalking Protection Orders (SPO’s) came into effect in January last year and Sussex, which was the first force the country to obtain a court order that day, has now secured 29 in the first 12 months.

Detective Inspector Mick Richards of the force’s Public Protection Command, said; “These Orders, which we seek from Magistrates, have been an important development in helping us to better protect victims or anyone connected with them, in stalking cases

“For example, subjects can be prohibited from contacting, by any means, directly or indirectly, the named person on the Order. This includes but is not limited to contact in person, calls, letters, emails, messages and social media.

“They can also be prohibited from publishing any material, or making reference to any material already published, which references, refers or relates to the victim either directly or indirectly.

“They can also be prohibited from entering into an agreed exclusion zone, be that an area within the town or county. This would include where the victim works, usual routes taken for example, walking children to school.

“Some of the positive requirements include allowing officers access to the home address for the purposes of conducting risk assessments, having to re-register their home address every year, or if of no fixed address, having to attend a police station every week.

“There are other conditions that can be considered by the courts, depending on the nature of the stalking behaviour. These can include monitoring software, giving us the ability to check devices, to help make us aware of emerging new relationships that present risk.

“All applications and all the proposed conditions are accompanied by strong evidence submiited to the courts as to why we feel they are necessary to protect the victims.”

However an Order is not an alternative to prosecution for stalking offences under the Protection from Harassment Act 1997, and it can be used to strengthen prosecutions as well as safeguarding victims.

Mick Richards adds: “This new resource really helps us to protect victims. In Sussex we are already recording the second highest number of stalking reports anywhere in the UK outside London, and are now advising and supporting more victims than ever.

“With better awareness and enhanced training our approach is more robust in keeping people safe and feeling safe. We encourage victims to come forward with the knowledge that our officers and staff are better trained and that they take all reports seriously.

“There is clearly an increased awareness and identification in society generally of stalking behaviour and that too helps us to provide early intervention and provide safeguarding to those in need.

“We have independent advice on our response to stalking and harassment, from partners such as Veritas Justice, and this has improved our understanding of stalking as well as its impact on victims. We regularly review our response to ensure we have taken the right action and to identify learning for our staff.”

Officers and staff complete online mandatory stalking and harassment training so they can provide the right response and keep people safe and further specialised training is being delivered.

“They give victims reassurance that their situation in being taken seriously by allowing police officers to take swift and decisive action against perpetrators and put restrictions in place. It also means that officers can then enforce any breaches where necessary, thus providing added protection for victims.

“We know that Stalking is an insidious crime that destroys lives and I hope these significant advances in earlier protection will give even more victims the confidence to come forward and report to the police.

“We are also soon to launch the county’s first Stalking Perpetrator Programme, meaning those who are issued an SPO will also receive vital specialist interventions to address and break the cycle of their fixated behaviours.”

If you are being stalked or harassed it is important that you report it. Stalkers are fixated and obsessive offenders who will not stop.

You can report stalking or harassment online or by calling 101 or in person at your local police station.

But always call 999 if you are in danger. Officers and staff will undertake a risk assessment and focus on keeping you safe.

If you would like further information about stalking or harassment, there are several organisations that specialise in providing advice and support to victims.

Veritas Justice is a local Sussex organisation which provides advocacy and support for victims of stalking.

The National Stalking Helpline provides advice and guidance to current or previous victims of stalking or harassment. The helpline can be contacted on 0808 802 0300.

Further local information and advice is also available at the specialist advisory site SafeSpaceSussex and on the Sussex Police website.