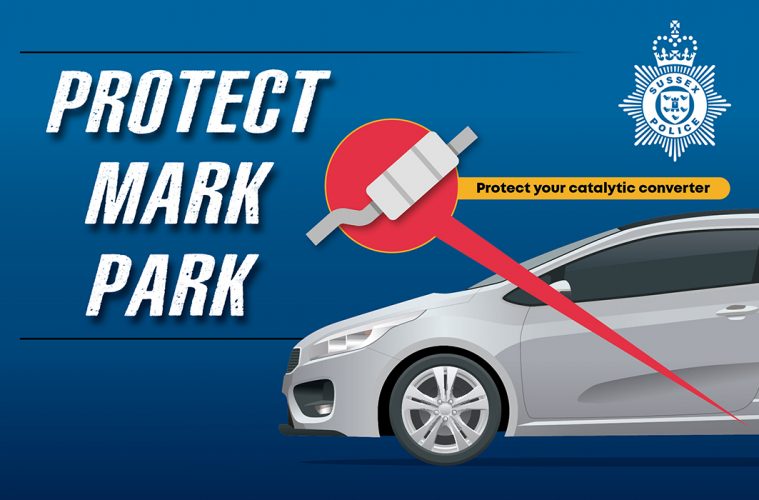 Police in Sussex carried out a week of action focusing on the theft of catalytic converters.

Catalytic converters are stolen for the precious metals they contain. These metals have surged in value recently, leading to more offences committed by organised crime networks.

Sussex Police took part in a national week of action, from April 19 – 25, with a focus on awareness, education, enforcement and intelligence gathering.

Officers from the Neighbourhood Policing Teams carried out 21 visits to scrap metal dealers to identify and develop information on who is buying and selling the parts, and to check everyone was operating with the appropriate licences. They also visited seven catalytic converter buyers, paid four visits to vehicle dismantlers and stopped 15 mobile collectors.

A number of scrap metal dealers also signed up to a database used by police and partners to gather and share intelligence around catalytic converter thefts.

Two stolen catalytic converters were recovered during the week, as well as a van full of scrap metal.

A third man was arrested on suspicion of attempted theft from a motor vehicle, dangerous driving, driving without insurance, failing to stop, and possession of a Class A drug. He has been released under investigation while enquiries continue.

A fourth man attended a voluntary police interview in relation to five counts of theft from a motor vehicle, dangerous driving, driving with no insurance and failing to stop. He has also been released under investigation.

During the week, 250 car owners also took advantage of free catalytic converter property marking carried out in partnership by garages and police across the county.

Catalytic converters can be forensically marked using special liquids with a unique code detectable under a UV light. This can make it harder for thieves to dispose of stolen catalytic converters, and can lead to the detection of crime and reunite people with their property.

Detective Chief Inspector Jo Grantham said: “Thefts of catalytic converters can not only have a serious financial impact on victims, but also an emotional impact as it can affect their day-to-day activity and livelihoods.

“This is an issue we take extremely seriously and this week of action is just a snapshot of the work we do to try and tackle the problem.

“We continue to gather information around thefts, and encourage people to report any offences or suspicious behaviour to us to help us build that intelligence.

“We also ask people to take a look at the advice and consider steps they can take to protect their vehicles.”

Police are encouraging car owners to:

For more information on how to protect your vehicle, visit our website here.