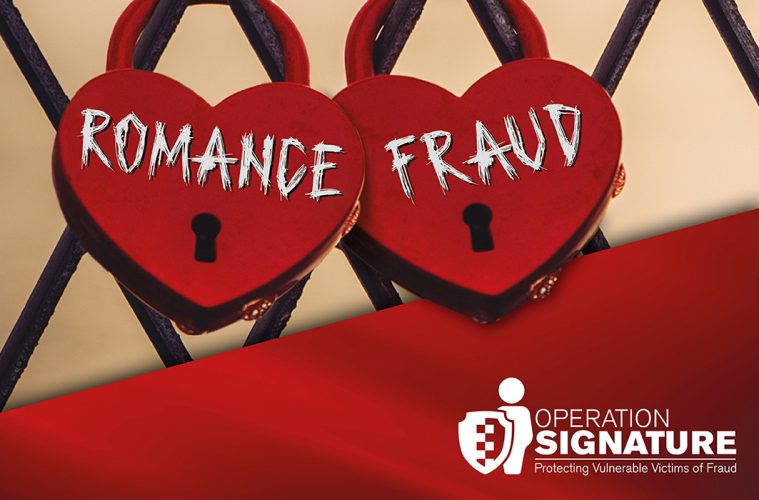 This Valentine’s Day, Sussex Police is raising awareness of the devastating impact romance fraud has on victims to help prevent further cases.

Romance fraud is where scammers convince their victims they have met the perfect partner online – but they aren’t who they say they are and may be using a fake profile to form relationships.

Once they’ve gained the trust of their victims, fraudsters will typically tell them about an issue they are experiencing and need financial help with. They will exploit the victim’s desire to form a loving relationship to financially profit.

Sussex Police received 286 reports of romance fraud in 2020, a 68 per cent increase from 2019. Over half of victims live alone and the average loss was £17,993. The vast majority of victims were contacted through social media and dating sites.

An anonymous woman from Chichester who fell victim to a romance fraud scam has spoken out about her experience to warn others not to fall for similar scams.

The victim – aged 78 – lost more than £2,000 when she fell in love with a man she met playing an online scrabble game.

She said: “We found we had so much in common. We had both lost our spouses and a child. He said he was a 63-year-old American, and he was working on an overseas oil rig.

“It developed into a loving conversation over days. We exchanged photos and spoke on the phone and there was even talk of getting engaged.”

Weeks into the relationship, the victim began sending the scammer money after he claimed his work tools had fallen into the sea after the oil rig was damaged. In the months that followed she used all her savings to help him out of various difficulties.

“I gave him everything I had and started borrowing from my family,” she added.

The victim’s daughter contacted Sussex Police after the scammer asked her for £10,000 so he could get to Southampton to visit her. She and her sister did a reverse online search on his photo and found it was linked to six other identities.

PC Bernadette Lawrie, Financial Abuse Safeguarding Officer for Sussex and Surrey Police said: “Fraud is one of the fastest growing crime types and we want to make people aware of the impact this awful crime has to help prevent further cases.

“Romance fraudsters prey on victim’s hopes of finding a genuine and meaningful connection and then capitalise on it. Many of the cases reported to us happened during lockdown, when people have been feeling more lonely than usual, making these crimes particularly deplorable.

“We are taking action on romance fraud by raising awareness of what to watch out for. Through Operation Signature, our campaign to identify and support vulnerable fraud victims, we are providing help and support to victims and issuing prevention advice in local communities.

“Sadly, some people who become victims of romance fraud feel too embarrassed to report it to police or talk to friends or family. There is absolutely nothing to be ashamed about – please speak to us in confidence and we will do whatever we can to help.”

Sussex Police & Crime Commissioner, Katy Bourne says: “Organised criminals are acutely aware of how lonely and isolated people are at this time and a lockdown Valentine’s Day provides the perfect opportunity for fraudsters to prey on those who are seeking love and affection.

“This crime is not only deceiving and can con our residents out of hard-earned savings but it is also incredibly cruel.

“That is why the services and specialist skills of our Fraud Caseworkers are so incredibly important. I’m really pleased with the work they are doing to successfully protect and support our most vulnerable victims of fraud.

“Please heed the advice being issued by Action Fraud and the police this Valentine’s Day. Be vigilant to the signs they tell you to look out for and protect your savings and, more importantly, your heart.”

Don’t rush into an online relationship – get to know the person, not the profile and ask plenty of questions.

Analyse their profile – confirm their identity. Check the person is genuine by putting their name, profile pictures or any repeatedly used phrases and the term ‘dating scam’ into your search engine.

Talk to your friends and family – be wary of anyone who tells you not to tell others about them.

Evade scammers – never send money or share your bank details with, someone you’ve only met online, no matter what reason they give or how long you’ve been speaking to them.

Stay on the dating site messenger service – until you’re confident the person is who they say they are.

The majority of accounts on dating websites are genuine people looking for romance, but fraudsters may try to contact you by making fake profiles, getting in touch and building what feels like a loving relationship.

Once a fraudster using a fake dating profile is confident that they’ve won your trust, they will tell you about a problem they’re experiencing and ask you to help out by sending money.

They may have arranged to visit you, but need money to pay for the flight or visa. They may tell you everything has been booked but their ticket has been stolen, and you need to send money quickly to get them on the next flight.

Alternatively they may prey on your sympathies, telling you a family member or someone else they are responsible for is ill and they need money for medical treatment.

Fraudsters may also use the conversations you have to find out enough personal information about you to commit identity fraud. They’ll ask innocent-looking questions about you that make it look like they just want to get to know you, such as your date of birth, home address or family background.

How to report it

Report romance fraud to Sussex Police online or by calling 101.

Sussex Police are encouraging victims of romance fraud to report the scammer who has targeted them to Scamalytics, anonymously, via an online form.

Scamalytics then provide a mechanism for dating services to check their users against romance scammers.  The service is free, and dating services are encouraged to take it up, not least to demonstrate to the police that the industry is taking the issue seriously.  Dating services within the Scamalytics network have the police checks activated automatically.