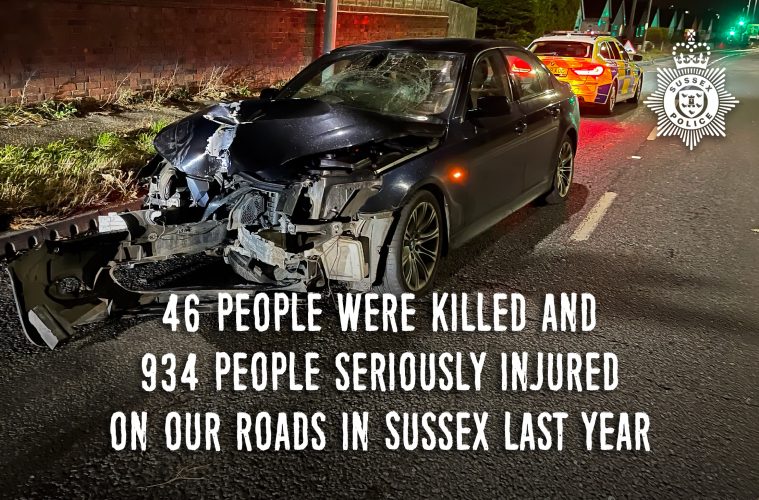 Sussex Police has this month launched its annual campaign to tackle road safety issues and positively influence drivers and motorcyclists to drive responsibly, considerately, and safely.

Every weekend between April and September officers from teams across the force will take part in the dedicated operation, providing a highly visible presence on the road network in Sussex and taking enforcement action where necessary.

Using a variety of tactics including the latest technology in automatic number plate recognition (ANPR) and drones, Sussex Police aims to reduce the “fatal five” factors which lead to people being killed or seriously injured on our roads.

The “fatal five” factors are: driving at inappropriate and excess speed, drink and/or drug-driving, not wearing a seatbelt, careless and anti-social driving, and being distracted while driving such as by using a mobile phone.

Chief Constable Jo Shiner said: “Last year, 46 people were killed on roads in Sussex and 934 people were seriously injured. This has a devastating impact on families, individuals, and upon our communities.

“We know that the fatal five offences are the main factors that cause serious road traffic collisions.

“A split second of inattention or poor driving can change lives forever. Everyone using the roads has a personal responsibility to keep themselves safe and not put others at risk.

“Which is why we simply will not tolerate the small minority of people who drive or ride anti-socially through the county, putting the safety of others at risk and therefore have a comprehensive plan to target those who do so.

“Communities are fed up with motorists and motorcyclists behaving badly on our roads, and this poor behaviour often leads to peaceful communities being regularly disturbed. Bad behaviour on the roads often indicates other criminality.

“So cracking down on those that use our roads to peddle drugs, transport vulnerable people or facilitate other crime will also be a priority in our campaign.

“We can’t be everywhere, but we could be anywhere, and with an increased number of officers, better equipment, and more intelligence, those intent on driving dangerously can assume we are not far away.”

A recent example includes the conviction of Giacomino Morrone, 24, of London Road, Burgess Hill, who was seen performing a wheelie in front of a convoy of unmarked police vehicles in Brighton.

Footage shows him riding at excess speed, reaching 80mph in a 20mph, riding through red lights, and reaching 107mph on the A27 in order to evade the police.

Sussex Police and Crime Commissioner Katy Bourne said: “We have an extensive but mainly rural roads network across Sussex with lots of minor roads. If we want to make them safer for everyone, we must recognise the dangers of all kinds of anti-social and careless driving.

“There is still a minority of people who have a complete disregard for other drivers, cyclists, horse riders and pedestrians. Last year, nearly 20 people were killed or seriously injured every week on our Sussex roads.

“The consequences of being distracted behind the wheel can be life-changing for those directly involved in collisions and their families and friends. They also take their toll on the mental well-being of our emergency services who are called out to attend.

“Operation Downsway will see more visible and more vigorous police enforcement which will ensure that those who drive dangerously and act recklessly behind the wheel, will be identified, caught and prosecuted.”

Partnership working is integral to delivering long-term road safety and so the force will also be working with agencies including the Sussex Safer Roads Partnership (SSRP), the Sussex Police and Crime Commissioner, Community Speed Watch groups and Operation Crackdown.

By working together, we can minimise the risk of deaths and injuries on the roads across Sussex.