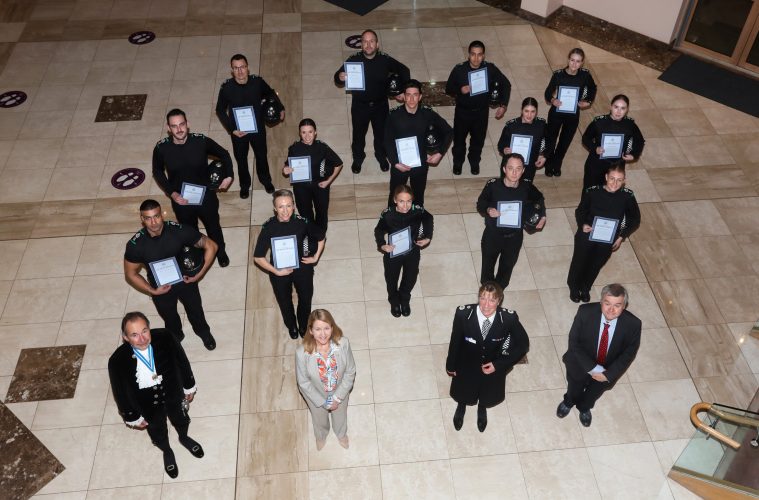 Seventy-six new recruits have taken their first steps into policing after being formally sworn-in at an attestation ceremony on Tuesday (11 January) at East Sussex National Golf Club.

It’s the largest intake to the force in recent years and for the first time, sees more women (53.6%) join through this route than men.

In addition to this 10% of the intake are people from Black, Asian and Minority backgrounds.

Family and friends were unable to attend the event due to Covid restrictions, but could watch the live stream of the ceremony which allowed them to submit supportive comments to the new recruits, some from as far away as Chicago Airport.

The new recruits will dedicate their time to keeping communities in Sussex safe, and are the latest to join through Operation Uplift – the national campaign to recruit an extra 20,000 officers across the country.

Chief Constable Jo Shiner said: “Welcome to the new recruits joining Sussex Police. This is the start of an exciting new chapter in their lives, serving our communities here in Sussex.

“To welcome another large cohort of officers is extremely positive and reassuring to the people of Sussex. It was thoroughly enjoyable to meet the recruits who are from a variety of different backgrounds and life experiences, which we hope can benefit them in their new career.

“This really is a unique career where not only are you changing your life, but helping numerous other people across our county and creating a strong bond with the team in which you work. In my role I am privileged to hear some incredible stories and outstanding achievements which focus on our goals of protecting communities, catching criminals and delivering an outstanding service.

“It’s also important to highlight that last week the latest recruitment window opened and I would encourage anyone aspiring for a fulfilling and challenging career to apply.”

I started my journey to being a police officer after leaving Spain following the 2009 financial crisis. I graduated with a degree in Geophysics however after not being able to obtain a job within this field I became a PCSO within Sussex Police, where I completed my apprenticeship with a double distinction – which isn’t bad considering I’m dyslexic and started learning English when I was over 30!  Working as a PCSO gave me the confidence to achieve what I intend. Sussex Police has been a very supportive employer where I have felt valued and I’m looking forward to doing the fast track programme to becoming a detective.  If you had told me seven years ago this is where my career would be heading, I would not have believed you!

I have recently joined Sussex Police as a police officer through the Degree Holder Entry Programme after seven years in Health and Social Care recruitment. A policing career always fascinated me – growing up in the Philippines where crime is rampant, I felt the need to help, especially those who are most vulnerable in society. However, I did not think I had the pathway to pursue policing until the launch of the new entry routes. I want to help in any way I can to make our communities safer, for those who live in them to feel heard and valued regardless of their backgrounds. Ultimately, as a police officer, I am hoping to grow both professionally and personally to further aid those who need my service most.  I feel very proud to represent the Filipino community, particularly Filipino women, within Sussex Police.

I wanted to be a police officer ever since leaving school but life took a different path. However, now that my son is a teenager I applied and I have been lucky enough to get a second chance to do the job I always wanted to do.

I had always wanted to join the police though my parents are very traditional and wanted me to go to university first. After eight years working in different management roles, I felt unfulfilled. I saw an advert on Facebook to say that Sussex Police were recruiting for graduate positions and I thought ‘why not?’ and here I am! I have had interactions with the police and sometimes in rather desperate situations. An officer can have such a huge impact on taking control of an issue, calming the chaos, and reassuring those involved and around them, and that’s something I aspire to be like. I want to be able to make someone else have that sense of safety and confidence in Sussex Police.

This position with the police has given me an opportunity to break a cycle. I’ll be the first person in my family to get a degree and have a pension, while at the same time being able to use some of life experiences to give back to the system that helped me as a child and help others. That’s what makes it worth it.

Sussex Police and Crime Commissioner Katy Bourne said: “Officer attestations are one of the highlights of the year for me when I get to meet our impressive new recruits and their families as they take their oath to serve with fairness, integrity, diligence and impartiality.

“It is so reassuring that despite all the obvious challenges that a career in policing will face we have people who still want to make a difference. Swearing the oath to serve the Queen in the office of constable brings unique responsibilities and powers to help their peers make Sussex safer for us all.

“On behalf of Sussex residents, I warmly welcome all our officers to the force and the rewarding career ahead of them.”