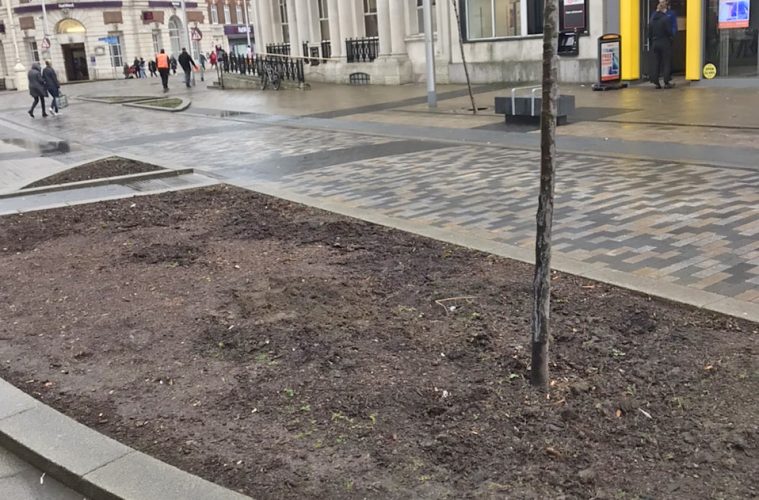 An Eastbourne councillor who highlighted serious deficiencies in the upkeep of the town’s green spaces has found herself inundated with comments and complaints from equally- concerned residents.

Conservative Kshama Shore mentioned at the last full council meeting of the Borough how key parts of the town were in a disgraceful state, dirty, not properly maintained and setting a bad impression for visitors.

Since then, the Sovereign ward member has found her inbox filled with criticisms of the way Eastbourne’s green spaces are maintained. “The state of Eastbourne’s public open spaces is worse than I thought”, admitted Cllr Shore.

“Among the comments made to me by residents were that our new multi-million-pound regenerated high street has stark, empty flower beds with a solitary wilting tree and how there may be a focus on keeping tourist areas clean and tidy, as a prime importance, residential grot spots are often ignored. Tourists don’t pay Eastbourne’s council tax, residents do, I was reminded.”

Of the town’s spaces which need urgent attention, the following were also highlighted to Cllr Shore:

·      Pavilion gardens — bushes are littered. No-one’s thought to put a litter bin or two in the gardens frequented by drinkers and people consuming free lunches from a local church.

·      Princes Park – bushes full of uncollected litter, clearly visible from the paths. Maintenance poor, bins not emptied.  Streetlights near the café have been on all day for about two years and a kids’ playground splash pad that pumps water straight into the brook rather than circulating it.

·      Sovereign Park – I picked up three bags of long-term litter before Christmas. The park is a site of “Nature Conservation Importance,” according to the signs. Clearly it is not that important judging by the apparent absence or lack of cleaning.

·      Redoubt — areas which clearly have not been swept for many months such is the accumulation of plant material and litter.

Others wrote to Cllr Shore about the shoddy state of our supposed ‘tourist town’ as the new season is poised to begin. Complains included:

·      Seafront has misleading and out-of-date posters stating an opening date of May 2021!

·      Pavilion Cafe received a so-called makeover but ‘on the cheap’ since the carpet wasn’t replaced, and neither was the ceiling which shows ugly stains from water ingress.

·      Redoubt Fortress and adjacent toilets have been shrouded in boarding and scaffolding for two years now.

·      Moving the Tourist Information Centre to the Welcome Building but leaving the signs at the old building saying TIC, and signage around the town still points to Cornfield Road.

·      The Winter Garden is slowly falling apart and visitors to the Congress and Tennis Tournament will be greeted with a building that looks a complete mess.

“I knew the situation was bad, but it’s clearly far, far worse than I feared”, said Cllr Shore. “I have made sure that all the issues raised with me have been passed to the relevant department so that action can be taken, if indeed any action will be taken.

“We have witnessed so much neglect with a report that the town’s street-cleaning workforce has been cut from around 50 to a mere 16! No wonder huge swathes of Eastbourne are not being cleaned properly if at all,” she added.