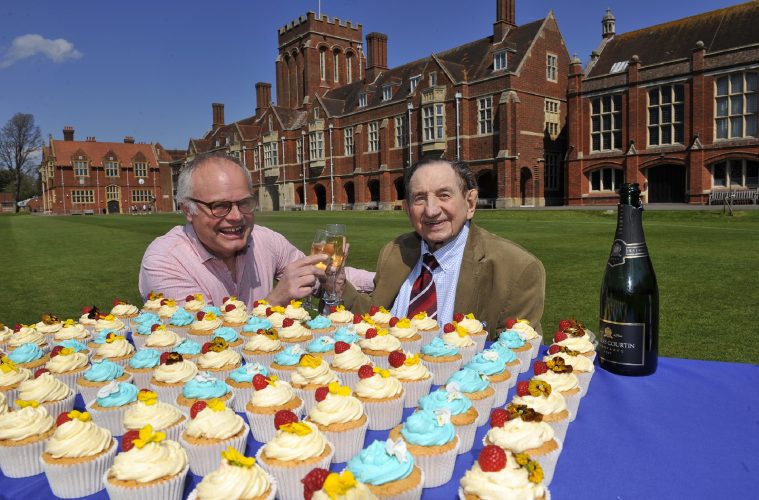 Eastbourne College welcomed back their oldest living former pupil, Derek Granger, yesterday to celebrate his 101st birthday with a special Q&A about his remarkable life.

The TV drama veteran returned to his former school in East Sussex on Sunday to take part in a conversation with theatre director and fellow Old Eastbournian David Grindley in front of a live audience, as part of the school’s new Circus Creative Arts Festival.

Derek is best known for producing the award-winning Brideshead Revisited series for Granada Television in 1981, which won several Baftas and has since become recognised as one of the greatest television dramas of all time.

Speaking about his long career in television, Derek said he had fond memories of his time as a scriptwriter and producer on Coronation Street in the early 1960s, but Brideshead Revisited is still his proudest achievement.

He said: “Brideshead Revisited was a very lucky break for me to have such wonderful material to work on.

“I absolutely loved working on Coronation Street. I think I was probably actually happier doing that than anything else in television.”

Derek was also asked how he felt about returning to his former school, and his secret to reaching 101 years of age.

He said: “Curiosity. I always want to know what happens next.

“It’s rather wonderful to be back here – it looks much the same but with new additions.

After serving as a lieutenant in the Royal Navy during the Second World War, Derek started out in journalism as a drama critic on the Evening Argus in Brighton, before landing a job as the Financial Times’ first ever theatre critic thanks to a recommendation from Laurence Olivier.

A career change beckoned when Sidney Bernstein, founder of Granada Television, invited Derek to help head up the drama department. Derek was a script writer and producer on Coronation Street in its early days and went on to produce several adaptations for the small screen, including plays by the likes of Tennessee Williams and Harold Pinter.

Derek was among the Old Eastbournians who returned to the College to take part in the school’s first Circus Creative Arts Festival. The four-day festival included a range of talks and performances from former pupils who now work in the arts, such as actor Ed Speleers (of Downton Abbey and Outlander fame) and comedy writer Paul Mayhew-Archer (The Vicar of Dibley, Miranda).

Funds raised from the festival will go towards the school’s bursary programme, which enables children from low-income families to benefit from an education at Eastbourne College and St Andrew’s Prep.

Headmaster Tom Lawson said: “It was a pleasure to welcome Derek back to the College as he turned 101 and wonderful to see that his passion for stories and storytelling is clearly still as strong as ever.

“We’re grateful to Derek and all our generous former pupils who returned to the College for our first Circus Creative Arts Festival, to perform or share their insights on working in the arts and what they’ve been up to since school.

“At Eastbourne College we seek to develop creativity at every level and recognise that a good arts education is crucial in developing good character.

“The festival was a great opportunity for our current pupils to be inspired by their predecessors, as well as raising money for our bursary programme, which will allow young people who couldn’t ordinarily afford it, to benefit from a first-class, well-rounded education at the College.”

Eastbourne College is one of the UK’s leading co-educational boarding and day schools, known for combining academic excellence with a healthy approach to learning. Its motto is ‘Ex Oriente Salus’, meaning ‘safety’ or ‘health from the east’.

The College’s next open morning for Years 9 – 12 entry is on Saturday 14 May.